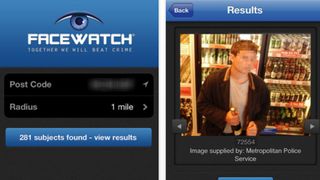 Do you recognise this man?

I'm looking at a photo of a very bad man. He's Asian, early twenties, dressed in jeans, trainers, a t-shirt and what looks like a tracksuit top. Maybe he's a shoplifter, or maybe he started a fight. Maybe he's a terrorist!

He looks a bit like that guy that lives round the corner, the one who never says hello. Better safe than sorry, eh? I click Identify, type his name and his address, send 'em off.

This is brilliant. Who else do we have? Here's an old guy, white, looks about sixty. I wonder what he did? Maybe he's a kiddie fiddler. Hang on, isn't that Mr Smith who runs the newsagent? It bloody looks like him. He's obviously done something. Wait till I tell the lads about this.

Welcome to Facewatch ID, which is either the future of law enforcement or the sort of thing the Stasi used to dream about. It's a mobile app designed for iPhones, iPads and BlackBerries, and the idea is simple: enter your (London) postcode and the Met Police will show you a bunch of images taken from CCTV cameras. If you think you know who the person is, you can shop them.

Facewatch began as a way for businesses to share images of shoplifters, but the Met would like it to do much more. According to Met Police Assistant Commissioner Mark Rowley: "The Metropolitan Police Service is determined to exploit the opportunities presented by CCTV to solve crime.

"The general public can support us in this - both by providing us with images - and then helping us to identify those who are responsible for committing crime."

There's something about Facewatch ID being an app that disturbs me in a way that "have you seen this man?" posters and Crimewatch reconstructions doesn't. What sort of person is going to go "Will I play Angry Birds Space, or go on Twitter? Nah, I'm going to spot me some criminals"?

I think that attitude is what worries me about Facewatch ID: we're quick to trust that if someone points a finger, it's being pointed at the right person for the right reason.

The app makes a point of saying that "No inference should be drawn that any person pictured is wanted by the police for criminal activity", but that seems naive to me: after all, if there's one thing that says "the Police don't want this person", it's the Police showing you a picture of that person and asking "Who is it? Where do they live? What do you know about them?"

I'm not apologising for criminals, but criminal-ID apps worry me for three reasons. First, there's the assumption of guilt: you know they've done *something*, but you don't know what. Second, there's the fear of unintended consequences and mistaken identity

. And third, there's the possibility for malicious users — curtain twitchers, racists, people with grudges, the sort of people who hang out in the bottom half of the internet — to use the system to cause trouble. Making false accusations is a crime too.