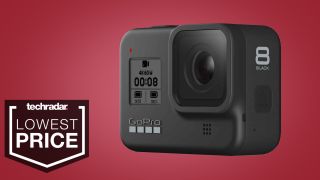 Black Friday delivered some great discounts on older GoPros, but the price of the new GoPro Hero 8 Black has remained pretty resolute – until now. Amazon has just cut the price of GoPro's flagship, which is only two months old, by an impressive 16% for Christmas.

This brings its price down to the level of its predecessor, the Hero 7 Black, making it an excellent buy for anyone who needs an action camera for someone's Christmas stocking.

The Hero 8 Black is the best action camera we've tested with a few handy upgrades on previous models, including a new built-in mount (to save you fitting it into a frame when attaching it to things), a new microphone and the promise of compatibility with GoPro's new Mod accessories in early 2020.

While other retailers have also discounted the Hero 8 Black, none have dropped to the £319 price tag available at Amazon. The deal below is at Amazon UK – if you're not in the UK, scroll past those to see the best GoPro Hero 8 Black deals where you are.

The lowest price yet for the Hero 8 Black

GoPro Hero 8 Black: £319 at Amazon
This is the lowest price we've seen for the Hero 8 Black, which is GoPro's new flagship action camera. It brings class-leading image stabilisation, a new built-in mount for easily attaching it to helmets or tripods, and compatibility with GoPro's forthcoming 'Mods' accessories in early 2020.View Deal

While the Hero 8 Black's improvements on its predecessor are relatively minor, its main benefit is yet to come – it'll be the only GoPro that's compatible with the company's forthcoming 'Mods' accessories, which will arrive in early 2020.

These accessories will be particularly useful for anyone looking to vlog with the Hero 8 Black, as they'll include the Media Mod (a frame that adds a 3.5mm mic port, shotgun mic and HDMI out) and the Display Mod (which adds a larger, rotatable display to the action cam).

For those looking to shoot in gloomier conditions or underwater, there'll also be the waterproof Light Mod, which will beam 200 lumens onto anything within three feet.

Not in the UK? Check out the best GoPro Hero 8 Black prices in your region below: