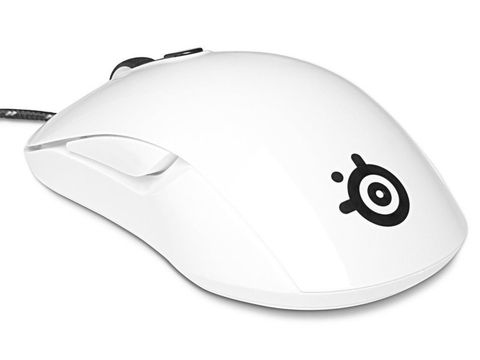 We'd recommend going for the black version, which looks nicer than this white one

According to SteelSeries, the design ethos behind its Kana mouse is epitomised by its name. 'Kana' means a number of different things in different languages, from 'blood' in Azerbaijan to 'Demigod' in Hawaiian, via 'canary' in Swedish.

The idea is that gaming is a culture made up of many languages, and transcends them all. This community of gamers has been consulted by SteelSeries over certain design aspects of the Kana mouse, with the aim of this mouse truly being a mouse designed for gamers by gamers.

In fact, the community's input into the design of the Kana mouse has been rather limited. There were requests for extra buttons, which SteelSeries has added, and there was a vote on SteelSeries' Facebook page to choose a colour - black or white. Black won the vote, although the white version is available to buy anyway.

We got sent the white version, and to be honest we can see why the black design won - the white, shiny plastic shell just looks a bit tacky. It feels rather cheap and hollow as well.

The SteelSeries Kana is designed to be a medium-sized mouse, situated between other mice the SteelSeries Kinzu and the SteelSeries Sensei. It lacks the weight and build quality of the Sensei, which is a shame, since it's nice to have a bit of heaviness behind a gaming mouse.

Similar to the Sensei, it has a small button in the middle to quickly change sensitivity on the fly.

The SteelSeries Kana's not a bad mouse, it's just a shame that it feels - and looks - cheap.