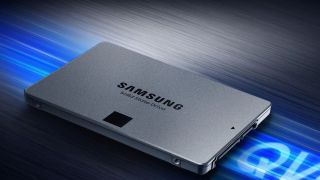 1TB is the sweet spot as far as solid state drives are concerned, with the cheapest 1TB SSD routinely available for around $80.

But if you need more capacity, it's often worth looking at a 2TB drive (unless you have enough space and connectors to plug in two separate 1TB drives).

Such items are falling in price rapidly and at least five models - from Samsung, Team Group, Crucial, Micron, and Gloway - can be purchased for under $200 (all from Newegg). Samsung is by far the most well known of the vendors, but its 860 QVO drive (MZ-76Q2T0B/AM) is based on QLC technology, which might raise eyebrows.

A great deal for those looking for affordable capacity with good performance and endurance. Samsung is one of a handful of SSD manufacturers that produces its own chips and as such can deliver better value for money, and the 2TB Samsung 860 QVO is the cheapest option per TB.

In a nutshell, QLC-based SSD tend to have lower endurance and performance, especially as the drive reaches capacity. They also usually have a shorter warranty compared to similar products. For what it’s worth, the Samsung’s 860 QVO has a three-year warranty, similar to other TLC-based products available at the same price.

On paper, the 860 QVO is faster than solid state drives from Micron and Crucial - in sequential and random read and write speeds. It also offers a written warranty of 720TB (i.e. writing/rewriting the drive 360 times over).

Samsung mitigates some of the issues associated with QLC via a feature called Intelligent TurboWrite, which accelerates write speeds and maintains long-term high performance with a larger variable buffer.