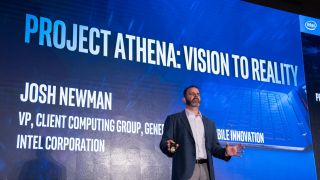 Even if Intel is taking a bit of a thrashing in the desktop space, it's always had a lead in the laptop space, and it looks like the company will be retaining that crown for a while longer.

At CES 2020, Intel announced a new lineup of 10th-generation Comet Lake processors for gaming laptops and workstations. Now, because this is Comet Lake and not Ice Lake, it will still be on the 14nm process, which Team Blue has been stuck on for a while now.

Still, AMD hasn't made a move to 7nm on its laptop chips, either, so that helps Intel stay ahead of the curve, even if that status quo won't remain in place forever.

These new 10th-generation laptop chips will be led by a Core i9 processor, just as the 9th-generation chips were. Now, Intel has only teased these processors, so we don't have all the exact specifications, but there are a couple of facts we do know. The Core i7 part will feature Turbo Boost speeds of up to 5GHz, which is mighty impressive for a laptop chip. And, if that wasn't enough, Intel is hinting that the Core i9 chip, which will only be found in the most high-end laptops, will feature even higher clock speeds.

We don't exactly know when these laptop chips will be coming to laptops, but they will be coming in 2020. All we can do now is wait and see - perhaps we'll hear more at Computex 2020 in Taipei.

Now, these laptop chips are cool and all, but one of the most exciting products in Intel's lineup each year is its NUC. These are essentially tiny living-room PCs that both look cool and don't take up too much space. This time around, the Intel Ghost Canyon NUC will be packed with Intel 9th-generation H-Series processors, which will feature boost clocks up to 5GHz.

That might be disappointing if you were expecting the latest and greatest in the new NUC, but we're sure they'll hit the streets before Intel's 10th-generation H-Series lineup (even if neither has a solid release date).

Previous NUCs had discrete class graphics, to be sure, but they were soldered onto the mainboard, the Hades Canyon NUC being especially notable, as it used AMD Vega graphics. This time around, however, you'll be able to slot in your own graphics solution, as long as it can fit in the small chassis. We don't know of many GPUs that can fit in this case, but who knows, maybe some will come out in the future?