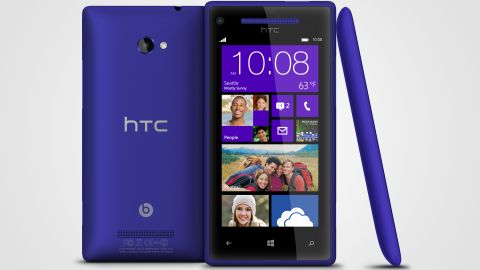 Is this the handset to really make Windows Phone a viable option?

A splash of colour, Microsoft's latest mobile platform and a sleek new body are combined with more powerful hardware - is the 8X the phone to bring Windows Phone 8 to the masses?

HTC's been in a bit of a weird position these last few years. From the days of anonymity when it made Windows phones for others, it rode the crest of the Android wave when Google's platform launched becoming, pretty much, the Android handset OEM of choice.

And then Samsung happened. HTC's offerings appeared to dip and even the pretty fantastic One X – struggled to make inroads against the seemingly unstoppable Galaxy line, currently led by the superb Galaxy S3.

HTC was up there at the starting block when Microsoft launched Windows Phone a couple of years back, and although it's competing with Samsung in this arena too – and its offerings haven't been what one would call "amazing" – HTC is clearly trying to make its voice heard.

And what better way to do that with some pretty bright colours and a newer version of Windows Phone that the world's been waiting for for months?

The HTC 8X comes in a range of colours - from muted black, to respectable red, to an elegant purple and a, quite frankly, hideous lollipop-lady yellow hue.

We were sent the purple model and it's a beauty. There had been rumours that the red would be reserved for Verizon users in the US – but it looks like the rest of world is now getting it too.

First thing we noticed is how thin the HTC 8X is. Not so much an amazing feat of engineering, but a clever trick.

With dimensions of 132.4 x 66.2 x 10.1mm, the HTC 8X is fairly average in size. But it's thinner round the edges to give the impression it's more svelte than it actually is. Not that this matters because it looks and feels thin most of the time and the slight curve around the back means it sits well, both on a surface and in the hand.

In fact, in the hand, it looks the same size as the HTC One X, despite the appearance given in our picture above.

Add to that the material the HTC 8X is made of – polycarbonate, like the One X – and you instantly have in your mitts a handset that feels like a real premium device. It's a unibody design so it's all nice and neat (win) but at the expense of a memory slot and replaceable battery (fail).

The front of the HTC 8X is taken up by the display. If you like what Nokia did with the Lumia 800, or indeed what HTC did with the One X, you'll be a fan of this too.

The screen just looks like it's been stuck on top of the phone and adds to that premium feel. There's also a splash of colour around the earpiece to remind you that the two are linked.

Next to this, you'll find the front-facing wide-angled camera, and the three Windows Phone softkeys at the bottom – back, search and menu.

That screen is an HD display at 720x1280. Spread over 4.3 inches, it's easily as sharp as Apple's retina display, which no longer appears to be anything special by modern standards.

The top of the HTC 8X is fairly minimalist with nothing other than the 3.5mm headphone jack and the lock button. Although we're not necessarily fans of lock buttons on top of larger phones due to the awkwardness they present, here, we weren't too fussed.

Due to the shape of the handset and the way it sits, it's easy enough to press with the index finger whether you're a left or right hander. Our only complaint is it is quite subtle and a few times, we had to feel around to find it if we were looking elsewhere. It doesn't stick out much.

The left hand side of the HTC 8X is completely bare, whilst all you'll find down at the bottom is the micro USB charging and syncing port.

The volume rocker is on the right and below it is a camera shutter key. We are always pleased to see these because it makes the art of launching the camera and taking a photo so much easier than messing about with software, no matter how good said software is.

There's also a tray for getting that micro SIM in – but you'll need to use a special tool to open it so make sure you keep it in a safe place.

The rear of the HTC 8X is a thing of beauty. That polycarbonate body really sets it off – as does the colour which sits beneath a silver HTC logo and another displaying the Beats Audio heritage. And of course, there's that main snapper with LED light which HTC promises will deliver amazing results.

The 8X will be pitching itself right against Nokia's latest Lumia range – and with the Lumia 920 also coming in a number of colourful iterations, telling them apart may be harder for those who aren't as used to Windows Phone products.

Like the Lumia 920, the HTC 8X will also come packing LTE connectivity in Australia - although 4G is missing from some international variants, which is worth paying attention to if you plan on grabbing one of these phones online.

This will be HTC's flagship Windows Phone handset, so don't expect it to be in the bargain bucket.

The 8X is available through Vodafone and Telstra on plans starting at $45 a month on Voda's 3G network, or $65 a month using Telstra's 4G network.