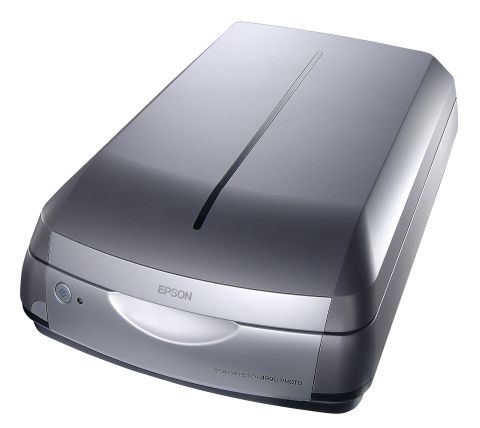 The best on test for reflective scan quality and outright speed, but at a hefty price.

One of the aims of such tests is to establish how much you need to pay for a flatbed scanner. Central to this is whether you want high-quality film scanning, as this is what tends to bump up the price. Cheaper flatbeds can scan film, but usually to a standard that's not acceptable.

You might imagine the resolution and precision required for film scanning would have a knock-on effect on reflective scan quality. We'll see about that. One thing that is immediately obvious, though, is this scanner's sheer speed. The 4990 comfortably beats the rest.

Although the 4990 doesn't sport a set of buttons on the front for routine scanning tasks, the scanning software is simple and direct to use, so any kind of reflective scan - from photo prints to magazine pages to black and white documents - can be set up in moments.

The software includes Epson Creativity Suite, Photoshop Elements 2.0 and SilverFast SE 6.0, which is a higher-end scanning application for photographic use. It's a shame that you get Elements 2.0 rather than version 3.0, but this reflects the fact the 4990 has been out for longer than the cheaper 4490 model.

The scan quality is excellent, with very strong but nonetheless realistic looking colours. The descreening filter appears to work well, but the 4990 wasn't quite as good as the 4490 in our 150dpi test, producing some interference artefacts in photos. The 6x4 photo scan couldn't be faulted.

Epson's flagship scanner shares top marks for quality with the Canon 9950F, but the Epson's faster scanning speeds mean it sneaks ahead overall.