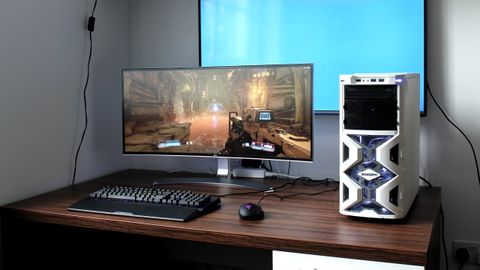 If you're looking to dive into 1440p and 4K gaming for under a grand, the StormForce Tornado is an attractive choice. Its Nvidia GTX 1070 GPU brings sublime performance, though you might want to add an SSD for extra speed.

There's rarely a better time to buy a new pre-built gaming PC than following the launch of a new generation of graphics cards. Pascal is Nvidia's most interesting GPU architecture in some time, if not ever, representing a true generational leap over its predecessor, Maxwell.

The StormForce Tornado comes with the new GTX 1070, which sits in the middle of the Nvidia's triumvirate of Pascal cards alongside the GTX 1060 and GTX 1080. StormForce has twinned the GPU with components that allow for excellent performance at 1080p and beyond. There's even enough grunt for VR and 4K gaming - though you'll have to dial the settings down a notch or two depending on the game for the latter.

It's amazing what a change of color can do for a chassis. Decked in white with black external drive bays, this Tornado Gaming Case is much more attractive than the dour all-black version used by ZooStorm, StormForce's sister brand, for previous builds. If a StormTrooper wanted a rig to match their body armor, this might be it.

The case's appearance is made more interesting by a mesh design on the front panel, which lights up two fans blowing cool air out of the front with a blue hue. Unfortunately we couldn't find a way to disable the lighting, which is annoying if you want to leave the machine on overnight.

The case has a very plastic feel, but it's practical. Removing two screws provides access to the components inside, in addition to three clips that allow the front panel to be taken off and cleaned.

Here is the StormForce Tornado configuration sent to TechRadar for review:

Nvidia's bruising GTX 1070 is the headline act here, so it's unsurprising that StormForce has had to hand-pick other components to keep the cost below £1,000/US$1,315/AUS$1,709. Manufactured on the 14-nanometer process, Intel's Core i5-6400 sits slap bang in the middle of the company's range of mainstream processors, and its maximum clock speed of 3.3GHz is more than sufficient for gaming.

Here's how the StormForce Tornado performed in our suite of benchmark tests:

Other 1070-equipped systems are currently thin on the ground, but the power over Nvidia's previous-generation card is clear when comparing it the Lenovo Ideacentre Y900 with a GTX 970 that we reviewed earlier this year. And, that system costs a full £100 (around $130 or AUS$170) more.

Where Lenovo's machine struggled to hit 60 fps on the games we tested on Ultra settings at 1080p, the StormForce Tornado managed it each and every time, surpassing it in titles such as GTA V, The Division and Doom (2016). In The Division, the 1070 managed an average of 61 fps with the resolution set to 1440p; switching over to Doom, it reached an average of 46 fps at 4K.

The gap between the two systems is also shown up in PCMark's Fire Strike benchmark. The Tornado almost doubled the Y900's score of 9,629, achieving 17,950 points. Despite its power, StormForce's machine runs quietly under full load with the fans only kicking in during visually intensive scenarios.

The Tornado loses marks when it comes to storage - at least in terms of speed. The 1TB SATA drive inside might take you a while to fill, but it renders longer boot and app loading times than what you would get with an SSD. Plus, Steam games take a noticeably longer time to install than we're used to with this drive.

It's currently difficult to go far wrong with one of Nvidia's Pascal cards right now. However, StormForce has successfully complemented the StormForce Tornado's GTX 1070 inside with an attractive case that's easily accessible and comes with plenty of ports, external drive bays and internal expansion options. It has the muscle to run pretty much any game comfortably at 1080p with each setting maxed out, and you'll get decent performance at 1440p, too.

Gaming at 4K resolution will require you to turn the settings down a notch or two if you want to hit those fluid frame rates, which is a fair trade off in our eyes. The StormForce Tornado is only let down by its persistent blue lightning on the front of the case and the lack of an SSD - but at least there's plenty of room inside the case to add your own.