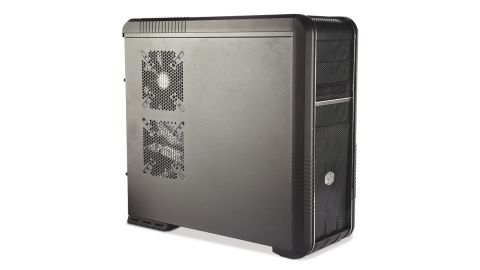 The Palicomp Alpha Detonator is the first fully Ivy Bridge PC through the TechRadar labs, and it's a bit of a beast.

You might be getting a little bit of Ivy Bridge - sorry, Intel 3rd Generation Core Microarchitecture - fatigue by now and that's only natural considering the lukewarm response we've given it so far. But bear with us as Palicomp has got in there early with our first example of an Ivy Bridge PC.

This Alpha Detonator is being put together as the perfect example of a modern, future-proof, gaming PC. It's been fully specced up to the nines, but it's been put together sensibly with a complete focus on gaming.

What does that mean?

Well, essentially that means Palicomp has opted for, what we're going to increasingly see as, the real gamer's chip from this new range of Intel processors. That's the Intel Core i5 3570K, and is the only K-series chip in the resolutely quad-core i5 lineup.

Palicomp has easily managed to hit 4.7GHz on air-cooling with this chip and that makes it fly.

At this speed you're getting the same sort of CPU benchmarks as you'll see in the eight-threaded Core i7 2700K at its stock speeds.

So if you're worried you might be missing out when it comes to the more CPU taxing tasks outside your regular gaming then the Alpha Detonator is set to stop those concerns in their tracks.

Games are still struggling to cope with multi-threading in any true sense of performance scaling, so a quad-core i5 without the i7's Hyperthreading shenanigans is fine for this sort of machine.

While the Ivy Bridge Core i5 is the new component of this machine, the Gigabyte Z77X-D3H is a decent partner. We've checked out the excellent Gigabyte Z77X-UD5H and this slightly cut-down version is almost as good.

While the UEFI BIOS still doesn't have the usability of the Asus boards it's still got all the functionality as well as the overclocking chops.

It's impossible to recommend the Intel Core i5 3570K as an upgrade for anyone rocking an i5 Sandy Bridge or above.

Realistically this is for those people who skipped a CPU generation.

We put it against the same spec with a Core i5 2500K at the same clocks and there was only a slight difference in the CPU benchmarks, but then only 4% and 10% in Cinebench and X264 respectively.