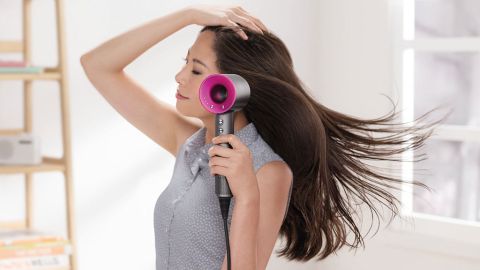 Aside from a power switch and a button to instantly turn the Supersonic's airflow cool, there are two main buttons used to control the device. The first, which has a little picture of a fan on it, scrolls through three different airflow speeds, while the button to its right, which has a red dot on it, allows you to cycle between three heat settings.

The power level on each of these settings is indicated by three LED lights (white lights for power, red lights for heat) right above each button, making it easy to keep track of how powerful and how hot you've set the device.

In terms of drying speed, the Supersonic is on par with most devices of its kind, taking around 3-6 minutes to turn wet hair dry, depending on the thickness and length of your hair. Though it doesn't get as (irresponsibly) hot as cheaper competing dryers, its sheer blowing power makes sure to get you well-coiffed quickly.

It's important to note that the Dyson Supersonic is a corded product, so while it might've been extra impressive to have a cordless model in the same vein as the company's excellent cordless vacuums, it would also come with significant drawbacks.

The unit would need to be bulkier and heavier to accommodate an in-built battery, and short battery life and long recharge times would make that proposition hardly worth investing in. Most people will be using the Dyson Supersonic in front of mirror anyway, so being tied to the wall is really no big deal.

Though it's only got one real function (and one that's hard to get wrong, at that), we can't help but overstate just how well it performs that singular task.

The Dyson Supersonic is a pleasure to use, with its perfectly-weighted build, attractive design, easy-to-use settings and quiet-yet-powerful airflow, you really do feel like you're using a high-end, luxury product.

Admittedly, the Supersonic is incredibly expensive for a hair dryer, costing 2-3 times as much as a professional grade hair dryer from a well-renowned brand like ghd, which are priced at roughly AU$250/£145.

With that said, Dyson execs have suggested that the Supersonic is so well-built, that it should last at least ten years – a much longer lifespan than most other hair dryers. The actual warranty on the device is only two years, however, so that's not a guarantee set in stone.

Quite frankly, the device's exorbitant price is its only real drawback. It's likely going to be out of most people's price range. However, if you have disposable income and want the best hair dryer you can possibly get, or if you're a professional hair-stylist, you should look no further than the Dyson Supersonic. It really is the Porsche of hair dryers.