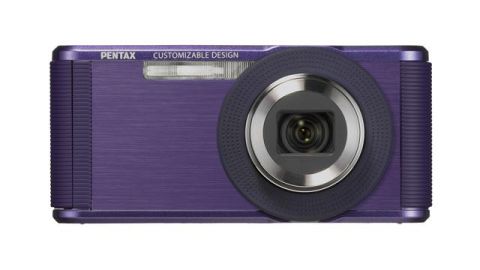 The entry-level ultra compact camera market has always been fierce, and now even more so with high-end smartphone cameras now rivalling the image quality of a dedicated point and shoot camera.

Video capability is also present, with the Pentax Optio LS465 capable of recording HD movies at 1280 x 720p at 30fps. While video recording is assisted by a digital shake reduction system, there's no image stabilisation for stills photography, so a steady hand is required when shooting in low light or at maximum telephoto zoom.

In an effort to stand out from the crowd, the Pentax Optio LS465 is available in a choice of Sapphire black, Ruby pink or Amethyst purple case colours with a selection of interchangeable front panel insert cards to add even more customisation.

The camera's back panel is dominated by a 2.7-inch, 230k-dot widescreen LCD screen, plus the usual essential navigation and basic control buttons for shooting and applying the inbuilt post-processing filters and effects.

Available for £99 (around $155), the Pentax Optio LS465 is keenly priced, but with both established and accomplished rivals such as the Canon IXUS 115 HS and Panasonic Lumix DMC-FS35 now costing similar money, is this Pentax a worthy alternative?

For such a modestly priced camera, build quality is impressively high. Although the external shell is almost entirely plastic, the fit and finish is precise and reassuringly solid.

The front panel is also slightly recessed to enable one of 10 supplied patterned inserts to sit behind a transparent plastic cover, making it easy to add some personality to your Pentax Optio LS465.

Sizing is roughly typical for the ultra-compact camera segment, measuring in at 101 x 46 x 22.5mm and weighing just 122g ready to shoot, meaning it should slip into a tight pocket or bag with ease. The 2.7-inch widescreen LCD may only have a resolution of 230k dots, but it's enough to compose and review images with good accuracy.

Reflections are problematic, however, and combined with a lack of overall brightness they make the screen a challenge to see under harsh sunlight. Viewing angles are also fairly poor, especially when the camera is tilted downward.

Controls are minimal but the essentials are all present, with buttons on the rear panel for directly controlling zoom, flash, macro, self-timer and playback functions, as well as a dedicated video record button. The buttons may be on the small side, but they're raised and sensitive enough to be easily pressed without needing to be prodded with a thumb nail.

Because the screen resolution lacks the detail of some rival displays, Pentax's interface menus aren't the most aesthetically pleasing, being somewhat pixelated. However, they are quick to navigate and easy to understand.

Exploring the menus reveals various scene modes, post-processing filters and simple editing functions that are all easy to operate, with some modes having a more pronounced effect than others.

Opening the battery compartment door reveals a 720mAh lithium rechargeable battery capable of approximately 200 shots or 130 minutes of video playback per charge. Although about average for this size of cell, we had difficulty attaining the claimed lifespan between charges, possibly due to needing a few more charges to reach full capacity.

Despite being an entry-level camera, the Pentax Optio LS465 is certainly no slouch to power-up, being ready to shoot in approximately two seconds.

Focusing is both fast and reasonably accurate in all but the darkest settings, while the extreme macro mode enables focusing as close as 5mm. Face recognition is included and able to detect up to 16 faces simultaneously. The system works quite well, provided your subjects aren't facing away from the lens too much.

The 5x optical zoom has a useful 28mm wide angle equivalent reach for capturing everyone in a close-up group shot, while the 140mm maximum optical zoom reach is enough when shooting handheld without an image stabilisation system. The buttons for zooming in and out aren't particularly precise, making it difficult to achieve precise focal length adjustment.

However, this is a minor complaint compared to the camera's most glaring flaw, the 16MP CCD sensor. More megapixels may be great for marketing purposes, but they by no means translate to better image quality. In the case of the Pentax Optio LS465, the abundance of pixels on such a tiny sensor means decreased light sensitivity and consequently more image noise.

Images taken at even the lowest ISO sensitivity settings show noticeable smoothing from the Pentax Optio LS465's noise-reduction algorithms. In an attempt to retain some detail, sharpening is applied to areas of obvious colour contrast, but the effect looks unnatural and the end result can resemble more of a watercolour painting than a photograph in areas of fine detail.

When the light goes down and ISO sensitivity is increased to 800 and above, things get even worse, with detail smeared from noise reduction processing so much that even viewing images at half size doesn't hide the blurriness.

Video recording on the Pentax Optio LS465 exacerbates these traits still further, meaning that videos shot under anything less than the clearest sunlight are so noisy and soft they make the HD recording resolution pointless.

To put this in context, shooting the same stills on a 6.3MP compact camera with a comparably sized CCD sensor gave results with noticeably more detail and less image noise throughout the ISO sensitivity range.

Things are partly redeemed by decent light metering, which sets the right exposure in almost all situations, while the auto white balance rarely introduces any unusual colour casts. Chromatic aberration is also negligible, being visible in only the highest contrast areas and never distracting.

Pentax includes various in-camera post-processing effects on the Optio LS465, such as a Miniature Mode, HDR Effect and a Lomography-style Toy Camera filter. The latter works quite well given that many images are already rather soft, but the HDR mode is too extreme to look either realistic or attractive.

It's hard to be too critical of the Pentax Optio LS465, given that it's easy to use, provides quick focusing and decent exposure metering for a such a modest outlay. But unfortunately this just isn't enough to secure success in such a competitive sector.

The simple, stress-free operation afforded by reliable autofocus and exposure metering, all contained within a reassuringly solid yet lightweight and compact body, is excellent.

Imprecise zoom controls and a lack of image stabilisation makes zooming more difficult than it need be. This alone wouldn't be a deal-breaker, but the 16MP CCD really spoils the package, with more noise and resultant image smoothing than we've come to expect from the market leaders.

For those who just want a simple and cheap point and shoot camera, the Pentax Optio LS465 will deliver and should be a solid and reliable companion. However, the shortcomings in image quality are clear to see, and are likely to disappoint even casual users.

Image quality must also stand up to close scrutiny, and in this area the Pentax Optio LS465 just can't compete with similarly priced offerings from brands like Canon or Panasonic, such as the Canon IXUS 115 HS or Panasonic Lumix DMC-FS35.

Given that other manufacturers can provide similar usability, build quality and significantly better image quality for a comparable price, it makes it difficult to recommend the Pentax Optio LS465.

Next Page Image quality and resolution