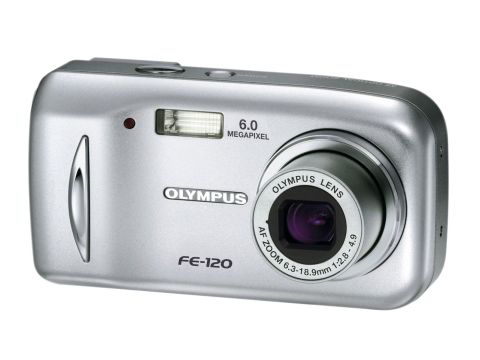 Fairly simple to use, the FE-120 is let down by its cheap feel and rather dated design and looks

When you think that plenty of D-SLR cameras only offer 6Mp resolution, it's quite something that you can get the same number of pixels out of a £120 compact camera.

However, in practical terms, the difference between the 5Mp offered by the Kodak C360 on test and the 6Mp of the Olympus makes very little difference and certainly doesn't justify any extra outlay. More importantly, while the Kodak has a really solid, quality feel to it, the Olympus feels cheap and plasticky when held in the hand.

The usual range of scene modes is on offer from the main control dial on the back of the camera. Unfortunately, the dial itself is positioned right on the edge of the back plate and, in our tests, we found that we kept accidentally flicking to an unwanted setting, just in the process of picking up the camera. Other than that, the feature set is a typical array that stretches from a 3x optical zoom lens to a multi-mode flash.

As with most budget cameras nowadays, the FE-120 runs from two AA batteries rather than a specialist power pack, although this does have advantages if you're on holiday and don't have a charger with you.

A paltry 14Mb of internal memory doesn't go far in a 6Mp camera but worse news is that the FE-120 takes xD Picture Cards, which are more difficult to get hold of and tend to be a little bit more pricey than the more common SD variety.

Image quality is adequate rather than stunning, even taking the fairly low price of the camera into account. Sharpness proved more consistent than with the HP and colour rendition was very natural, although images were quite prone to unwanted noise, especially when the auto-sensitivity feature starts to up the ISO values.

Fairly simple to use, the FE-120 is let down by its cheap feel and rather dated design and looks. Matthew Harris