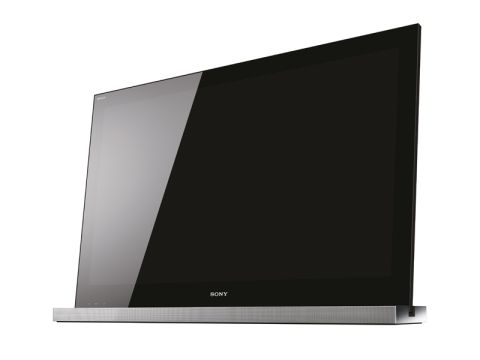 An elegant, high-performance TV with class leading online features, but its high price may not appeal to the mass market

The Sony Bravia KDL-46NX703 makes a big impact right out of the box, with its slender profile thanks to edge LED lighting and Sony's single-layer 'Monolithic' fascia. Our test sample was finished in a striking white, too.

Connections are extensive, including four HDMIs, an Ethernet port, a USB port and, best of all, built-in Wi-Fi. As you'd expect from this, the 46NX703 is fully geared up for accessing both a DLNA PC and Sony's Bravia Internet Video online service.

The latter is pretty excellent, with reams of high quality video content from a wide array of sources including YouTube, Fifa, EuroSport, the Demand Five Channel 5 'iPlayer' and Lovefilm. The quality and stability of all the Bravia Internet Video content is impressive too, as is the quantity of different multimedia file formats the set can handle via its DLNA and USB capabilities.

As we'd expect from such a high-level Sony TV, the screen is loaded with picture processing, including the brand's excellent Bravia Engine 3, Live Colour and MotionFlow 100Hz systems.

The remote control and onscreen menus make accessing some of the features a bit fiddly and convoluted, but hopefully you won't need to revisit menus too often after setup.

Standard and high-definition pictures both look clean and pure too, while black levels rate as among the best we've seen on an edge-lit TV. The MotionFlow 100Hz engine plays its part in the general picture purity, too, reducing motion blur and judder to a minimum.

There are a few minor problems, though, starting with some gentle backlight inconsistency just about visible during very dark scenes. But you won't see this for most of your viewing time and even when you do, it's seldom truly distracting.

The Sony's viewing angle is rather limited, too, compared with Panasonic's plasma model, and finally, HD material doesn't look quite as crisp and detailed as it does on some rivals. But some people might actually prefer its slightly less forensic approach.

Sonically, the 46NX703 is only average. Voices sound reasonably realistic and trebles are clean, but bass sounds muddy and weak, as is so often the case with slimline TVs. Hopefully the optional speaker bar/ stand improves audio delivery.

Overall, the 46NX703 is a very likeable TV, if slightly expensive. It looks great, delivers some excellent, pictures and offers some sterling network features.