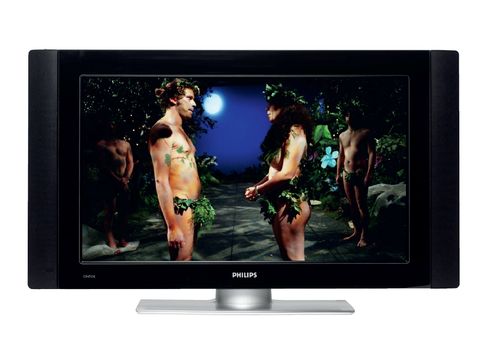 Clear LCD is definitely something worth getting excited about

If you liked the sound of Philips' new Clear LCD technology as used in the Philips 42PF9831D, but you can't afford that TV's £3,000 asking price, take heart: the 32PF9631D is a 32in Clear LCD model that's yours for just £1,400. A much more mainstream proposition all round - and one which, while not flawless, confirms that Clear LCD is definitely something worth getting excited about.

As with most of Philips' higher-end LCD TVs these days, the 32PF9631D is quite a looker, wearing a jet-black suit that's resplendent in its high-gloss finish.

Connectivity, meanwhile, includes a USB port that can handle JPEG, MP3, MP3 Pro, LPCM, MPEG1 and MPEG2 files, as well as two HDMIs, component video jacks, and a PC VGA port. The version of Clear LCD sported by the 32PF9631D is identical to that found on the 42PF9831D.

Perhaps in a bid to make it as affordable as possible, the 32PF9631D uses Pixel Plus 2 HD picture processing rather than the new Pixel Plus 3 HD system. This means the 32in model doesn't enjoy the extra colour boost and new noise reduction talents of the 42PF9831D.

While these strengths certainly assist the 42PF9831D, it's not as if we haven't seen some very accomplished Pixel Plus 2 performances before now.

The other main feature of the 32PF9631D is its built-in digital tuner, which works well except for one annoying, and frankly bizarre, quirk: there's no support for the Freeview seven-day electronic programme guide.

That Clear LCD works magic with standard-definition pictures. England's cricketers, for instance, move around the pitch noticeably more clearly with Clear LCD activated, and black levels look superb during an episode of Buffy the Vampire Slayer from a DVD.

The set is also good with HDTV, despite processing power limitations meaning HD material doesn't benefit from all of Clear LCD's talents. The TV delivers all of HD's trademark sharpness and texture, against a backdrop of more sensational black levels, and colours that are strikingly rich and well saturated without becoming cartoony.

Our only complaints with the picture are that motion in high-definition material isn't as clear as when watching standard-def; applying Clear LCD to standard-definition slightly reduces the picture's details; and there's slightly more processing noise from Pixel Plus 2 HD than we saw with Pixel Plus 3 HD. None of this stops the pictures from being excellent overall, however.

Sonically it performs solidly too, blasting out a pleasingly aggressive soundstage full of bass and rich in treble details.

If we were to be hypercritical, we might say the 32PF9631D feels a bit of a first go product - with its lack of seven-day EPG and the fact that Clear LCD doesn't work fully with HD - making us think that a more rounded model might appear at some point.

That said, it really wouldn't do to be too harsh on it, for the simple reason that if you put its performance in the context of today's rivals, it's comfortably the very best mid- range LCD TV around - and a winner in our annual awards into the bargain