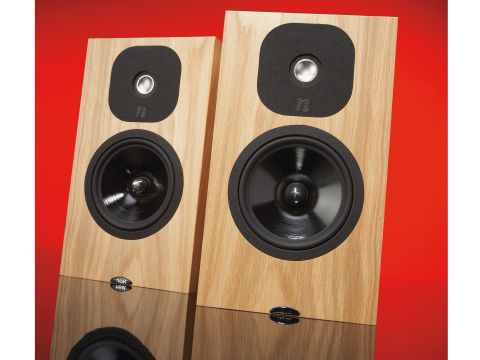 This is a brilliant standmount that sounds a lot bigger than it looks, boasting exceptional coherence and an impressively wide dynamic range. It's a great musical communicator at a very realistic price, though the top end may not suit all systems.

Neat Acoustics has been designing interesting hi-fi loudspeakers from its base in County Durham for over two decades now.

The company established its reputation with a small two-way standmount called the Petite, and has slowly but surely expanded its portfolio since then.

A decade ago Neat introduced the Gravitas, an isobaric-loaded passive subwoofer to partner the Petite, which was followed a few years later by the Ultimatum range that featured built-in isobaric bass loading. The smallest of these, the MFS, is very much the inspiration for the new, simpler and much less expensive Momentum 3i.

Though still quite costly for a standmount at £1,745 per pair, this speaker is only a little more than half the price of the MFS, and while it lacks the planar supertweeters used in the Ultimatum model, it does include the isobaric bass-loading and a high-quality wood-veneered enclosure.

The term 'isobaric' requires some explanation as it's an uncommon approach, even though its actual modus operandi is still a matter of some debate. In essence, it involves mounting a second bass/mid driver on a separate baffle inside the enclosure, separated by a cavity from the driver mounted on the front, and operating in acoustic series and electrical parallel.

Exactly how this operates isn't entirely clear. Neat glues its drivers in place, for superior mechanical integrity, so internal examination isn't possible, though a diagram on the company's website suggests that the cavity between the drivers is quite small.

Assuming the cavity intimately couples the two diaphragms together, it effectively doubles the moving mass of the diaphragm (lowering its fundamental resonance), and also doubles the electromotive 'shove'. The actual benefit here probably has as much to do with delivering good extension from a relatively compact enclosure as with any other factor.

However, an alternative way of looking at the system is to see the internal driver as removing much of the effect of the enclosure from the driver on the front, cutting the build-up of pressure as well as reducing internal reflections from reaching the back of that driver.

Isobaric or not, this is essentially a two-way design. The main driver (and presumably its internal partner, though that can't be confirmed) is Neat's familiar high-class 168mm unit with a 120mm diameter doped and flared paper cone, now with a metal 'bullet' pole-piece extension.

For many years, Neat used to buy in its tweeters from French manufacturer Focal, who, unusually, make designs with inverted (concave) domes. However, a few years back, Focal decided to concentrate on its complete speaker systems and (almost) stop supplying raw drivers to other manufacturers.

Neat, therefore, chose to create its own tweeters. Because these use concave 25mm alloy dome diaphragms, they look rather like Focals, but they are in fact different.

A medium-size standmount with an internal volume of around 14 litres, the Momentum 3i comes in a choice of four smart matt-finished real-wood veneers - oak, maple, cherry and 'rosenut' being the standard options. The drivers are nicely rebated, and, as with other Neat speakers, there's no grille available.

The whole thing feels very solid, helped no doubt by the extra rigidity imparted by the internal partitioning and a total weight of 15kg - the same as for the Ultimatum MFS. A generous rear port shares the back panel with two terminal pairs that are spaced well apart and linked by brass strips.

The effect of the isobaric bass-loading is clearly visible in bass extension, which is unusually good for a standmount design. Part of this is down to the port being tuned to a relatively low 40Hz, but there's genuinely deep in-room bass here down to a low 25Hz.

It is often said that there's no such thing as a free lunch, and one of the likely consequences of extracting unusually low bass from a relatively small enclosure is relatively modest sensitivity.

Although Neat claims 88dB here, using our normal in-room far-field averaged technique, a significantly lower 86dB looks closer to reality. Furthermore, because of the twin bass units, the load is a quite demanding four ohms through much of the bass region. Pair-matching is adequate but not exceptional.

The overall in-room tonal balance is rather impressive, especially for such a compact speaker. Although punctuated by some unevenness, it stays within +/-3dB limits from 100Hz up to beyond the limits of audibility, while the sub-100Hz bass is just a shade on the strong side - subjectively nice, but also indicating that this speaker should definitely be sited well clear of walls.

Across the band, the most distinguishing features are a dip around 1.2kHz, a modicum of presence restraint (2-3.5kHz) and a top end that's rather strong and a little uneven.

The sound of the Momentum 3i does reflect its measured tonal balance to some extent, but it also goes quite a lot further than one might expect (especially after you replace those brass terminal bridges with some wire links).

As with the Ultimatum MFS, the sense of weight and scale is more like that of a floorstander than a standmount, yet at the same time it possesses the agility, spaciousness, lightness of touch and low box colorations associated with a high-quality bookshelf speaker.

The relatively small and exceedingly stiff enclosure, probably helped by the isobaric loading, is presumably responsible for the quite exceptional dynamic range. The bright and slightly too sparkly treble probably contributes as well, but the net result is a speaker that's brilliant at delivering all manner of delicate and subtle details deep down into the mix, making music much more human and believable.

Mild presence restraint notwithstanding, the Momentum 3i is quite forthright in how it projects voices, with a beguiling directness in the way midband information comes through.

Frazey Ford (lead singer of The Be Good Tanyas) has a voice and accent that makes lyrics quite difficult to understand, especially with more laid-back speakers, but with the Neats on the end of the chain, it's easy to make out every word, with no ambiguity. Although the top end is undoubtedly strong, and also arguably a shade exposed, it's in no way detached.

Rather, it sounds remarkably clean and coherent, considerably aiding diction by appropriately crispening the consonants, defining the sibilants and rendering audience applause with impressive realism.

Another clue to the inherently high quality of this speaker is the way it lays bare the differences in character between the various sources at the listener's disposal. FM radio sounds soft and gentle, just like FM radio should; vinyl's delicacy and transparency are immediately apparent, as is CD's solid, matter-of-fact digital precision. And, of course, TV sounds as exasperatingly compromised as we all know it should.

Although the Momentum 3i takes no prisoners with the sources it's fed, it always sounds sweet, inviting and exceptionally informative, provided the driving system is good enough. The bass is clean, powerful, weighty and well timed, without ever becoming oppressive, while imaging is spacious and well focused, with convincing portrayal of real or synthetic ambience.

This exceptionally revealing and involving loudspeaker offers much of the performance of Neat's flagship Ultimatum MFS loudspeaker at little more than half the price. Clearly it delivers superior value for money; our only reservation (and a minor one at that) is that the rather bright top end might sound too exposed in some systems.