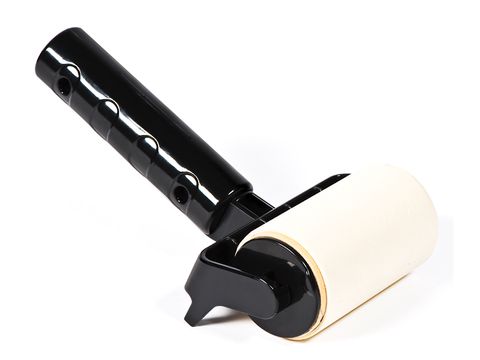 Looking like a lint roller, the Milty Pixall works best in conjunction with other record cleaning products

It may not do the whole job alone, but as an adjunct to a carbon-fibre brush this is very useful, lifting loose dust off a disc efficiently

The Milty Pixall seems to have been around since the ark, so presumably someone is buying it. I've not seen many true audiophiles wielding one, though.

Maybe people wonder about whether applying something sticky to the playing surface of a precious record is not such a good idea.

The basic idea is exactly the same as those rollers used to take lint of clothes. The roller is sticky and has enough compliance to get some way into the grooves of an LP so as to pick up loose dust and fluff.

After a while the surface loses its 'stick' but you can peel a layer off to reveal a fresh surface underneath. Refills (1.8m, or about 11 or 12 layers) are available for £8.

The actual sticky material looks a lot like decorators' masking tape, that's been wound inside-out. It certainly does lift dust.

I found, however, that it doesn't penetrate far enough into the grooves to lift out the finest particles, and for best results one can use the Pixall after a sweep with a carbon-fibre brush (Milty makes one of those too), which does get right into the grooves but tends to leave a visible line of dust particles behind. Running the Pixall over that line a couple of times leaves little or nothing to see.

As for possible damage, I couldn't detect any ill effects. There's certainly no sticky residue, and even with rough handling the roller doesn't scratch the disc.

For that to happen, you would probably damage the underside first, or just break the roller handle.