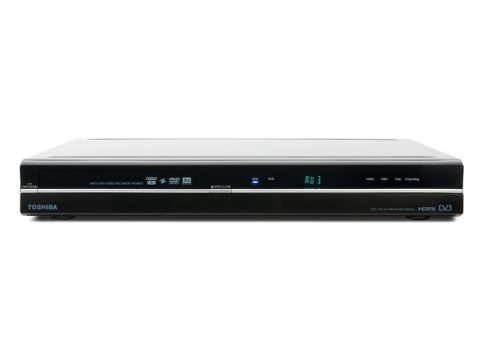 The Toshiba RD99DT is a refresh of the RD98DT, a disappointing 250GB HDD/DVD recorder we reviewed a while ago.

Toshiba has made some subtle tweaks to the external and onscreen design of the RD99DT and has added a USB port, but otherwise the spec is virtually identical to its predecessor. So we hope the rough spots have been ironed out.

The 250GB hard disk can hold up to 424hrs of recordings, but the exact amount depends on what modes are used. Toshiba offers five of these, including best quality XP, SP, LP, EP and lowest quality SLP.

These come in handy when archiving HDD recordings on DVD, as you can squeeze up to eight hours on to a single disc. Sadly, the recorder won't save to any of the dual-layer DVD variants.

Formatting DVD-RW discs in VR mode gives you the same range of editing features as hard-disk recordings, including the ability to create your own playlists. It also features Freeview+ and the all-important series link option, which unusually shows you a list of all of the relevant broadcasts over the coming week.

Also on board are split and alternate instance recording options. You get all the usual hard disk tricks, too, such as chasing playback, simultaneous recording/ playback and pause live TV, although the latter feature eats up precious hard disk space.

Unlike many of its rivals, the RD99DT doesn't let you copy music, video or photos onto the drive, which may disappoint those who want to enjoy their media collection on their home cinema system.

The revamped EPG still leaves a lot to be desired, with its cluttered arrangement and squashed grid (that shows seven channels at a time). But on the plus side, it's quick to populate and the coloured keys make it simple to get around.

Hit 'Info' while watching TV and an onscreen banner provides 'now and next' programme details, but it's a shame you can't search further ahead or browse other channels.

Elsewhere, the Title List's use of moving thumbnails, plus the 'New' icon that tells you which recordings you haven't watched, make it easy to identify your recordings. Most useful is a surprisingly simple editing function that enables you to cut out unwanted parts of your recordings.

The editing screen plays the programme in a box with a time line below it showing your current position – simply find the start and end points using the playback keys and hit delete. You can even preview your edits before making them final.

Toshiba has retained the same clunky remote as the previous model, which doesn't make life easy. The playback, info and programme change buttons get lost in the crowd and it's not particularly ergonomic.

But we do like both the dedicated button for changing HDMI output resolution and also the intuitive menu controls.

We are slightly dissatisfied with the live Freeview pictures upscaled to 1080p; they're soft, gauzy and contain a significant amount of mosquito noise, which detracts from their overall clarity. The deck struggles to render fine detail and TV presenters' facial features during midrange shots, while feathery edges make the image look untidy.

We tried changing the output resolution to 576p, 720p and 1080i to check if these were upscaling issues, but in each case the artefacts remain.

We compared it directly with a Sky+ HD box and although some of the processing noise can still be seen on Sky, they're more pronounced on the Toshiba.

But it's not all bad news. Colours are richly saturated without over-egging skin tones, motion is fluid and free from break-up, and a decent black level makes picture detail clearly visible in dark scenes.

The RD99DT's video encoding capabilities are excellent. Pictures look their best in the top quality XP mode, which captures the Freeview broadcast exactly as it looks live. SP mode shows a slight increase in noise, but it's hardly noticeable.

Picture quality in LP mode takes a dramatic tumble, but the image remains watchable. You can't say that about EP and SLP, but these poor pictures are a by-product of low-bitrate recording and on a par with most rivals.

When we load up The Limey on DVD, the RD99DT delivers some top-drawer 1080p picture quality. Detail on Terrence Stamp's face is well-defined, shadows within his black jacket are clear and nuanced, while skin tones look natural.

Like most digital recorders, the RD99DT features Dolby Digital Stereo Encoder technology to record sound more efficiently than PCM, and on the whole it does a fine job.

With TV recordings, speech is forthright and the other elements sound dynamic without suffering from distortion or drop-outs. There are no complaints either about Dolby Digital or DTS movie tracks fed to a receiver digitally, while music CDs played back through the analogue outputs boast a well balanced sound.

At £250, the RD99DT represents good value, considering the plentiful array of recording features on board and the sizeable hard disk.

It's just a pity that you have to tolerate some clunky onscreen displays, a poor remote and some below-par picture quality, all of which makes similarly priced recorders from LG and Panasonic, for example, much easier to recommend.