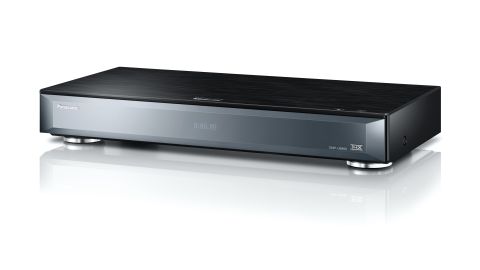 Update: Panasonic recently announced that it will bring the DMP-UB900 4K UHD Blu-ray player to the US starting in September for $700.

It may have landed several months later than promised, but the arrival of 4K UHD Blu-ray is perfectly timed to partner the first out-of-the-box HDR (High Dynamic Range) TVs – and the result is a marriage made in AV heaven.

Ultra HD Blu-ray is no small incremental improvement over 1080p – it ushers in a level of picture performance that hasn't been seen in the home before. We know that 4K streaming services from Netflix and Amazon look good, but what we have here is a class apart.

The DMP-UB900 is the first Ultra-HD Blu-ray player to launch in the UK, sneaking in ahead of Samsung's K8500. It's better specced that its rival, and that's reflected in the steeper £599 price point (that's about $855 / AU$1,125 – pricing and availability for the US and Australia have yet to be announced). It's also certified by THX as a 4K source component, another first.

Design-wise the UB900 looks much like Panasonic's previous high-end Blu-ray player, the DMP-BDT700. Behind the translucent drawbridge fascia the disc tray sits off to the left, with a USB port and SD slot beneath the central display.

There are two HDMI outputs on the rear. One delivers sound and vision, while the other is intended for audio only. In a typical home cinema setup all source components route via an AV receiver, but for this player you'll ideally need a receiver with HDMI 2.0a HDCP 2.2-compatible inputs.

Absent one of those you can route the Video/Audio output direct to your 4K screen, leaving the audio HDMI to route multichannel sound to the amp.

Additional connections include 7.1 analogue outputs, plus a stereo phono pair and two digital audio outs (optical and coaxial). Networking is via Ethernet or dual-band Wi-Fi. The player also supports Miracast, for smartphone mirroring.

Build quality is solid, with a nice finish, but the chassis is an unapologetic fingerprint magnet. The deck ships with a glossy IR remote.

The raison d'etre of the UB900 is to play 4K HDR Blu-rays, but the deck is also backwards-compatible with standard Blu-rays (including 3D discs), DVDs and CDs.

The player reviewed here is a stock UK release, which is to say Blu-ray support is geo-locked to Region B, while DVD playback adheres to Region 2. For other regional variants the same local rules apply. The good news is that all 4K UHD Blu-rays are region-free, which means any player will play any 4K disc.

The UB900 is also an accomplished media streamer and file playback device. Network content services include Netflix and Amazon Instant Video, both of which are 4K enabled, plus BBC iPlayer, BBC News and Sport, MySpace, YouTube and DailyMotion (amongst others).

Explore the menus and you'll find plenty to tweak, particularly on the audio side. There's a Dialogue Enhancer, which lifts the centre channel level, and 7.1 channel audio reformatting for 5.1 soundtracks, if you play out in PCM. For Dolby Atmos you'll want to leave the player outputting bitstream though.

In fact, there are so many minor settings adjustments that can be made that it's easy to get confused; when bamboozled, remember that Automatic is usually your best friend.

For all its cleverness though, the UB900 is not averse to looking daft. The screen saver is literally a box with the words 'screen saver' displayed inside – it's almost as if the text was put there as a placeholder, and then forgotten about. Pretty much anything else would have been preferable.

So how good is 4K Blu-ray? In a word: amazing. The detail and colour depth available is stunning. Disaster flick San Andreas proves to be a visual feast. 4K Blu-ray streams off disc at the best part of 100Mbps, compared to Netflix at 15Mbps, and has 10-bit colour with HDR grading.

I auditioned the player with Panasonic's 65-inch DX902 Ultra-HD Premium set, and I had to scoop my jaw repeatedly from the floor.

Optimum picture quality is display-dependant. For comparison, I used the player with a non-HDR 4K panel. While its pictures still looked terrific, image quality wasn't quite so dramatic. An 8-bit 4K panel with SDR performance really doesn't show the format off to its best advantage.

Indeed, a comparison between The Lego Movie in 4K SDR and its regular BD counterpart, upscaled on the same 4K screen, reveals few obvious differences. The same comparison on a bright HDR screen is (literally) night and day. Regardless of HDR, 4K disc playback needs an HDMI TV input with HDCP 2.2 support.

The deck is also a superior music player. The UB900 may not support legacy disc formats DVD-A or SACD, but it does a fabulous job of upsampling and massaging standard CDs. The deck's 192kHz upconversion is brilliant, while a so-called Sound Effects settings menu offers up some really nice refinements. There's a trio of audio resampling modes which lift upper frequency response, tailored to pop/rock, jazz and classical.

My favourite tweaks, though, are the Digital Tube presets, of which there are six. These emulate the characteristics of vacuum tube amplifiers, and while that might sound hokey, give them a try – I really dug Digital Sound Tube 2.