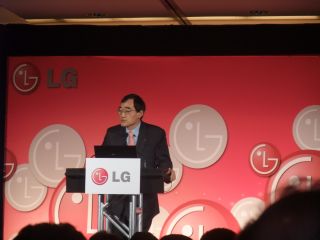 Getting right into the Las Vegas spirit by opening its CES keynote speech with the sound of swing, LG did all it could do wake up the hundreds of jet-lagged/hungover journalists who turned up to see the company show off its latest wares.

Eight in the morning has always been a traditional spot for LG at CES, so with the early start the company needed to pull something huge out of the bag to raise more than polite applause. Unfortunately it didn't.

The company's CEO Michael Ahn tried his best to introduce inspire by relaying a number of impressive statistics about the company's success last year.

A 16 per cent increase in sales (up 5.6bn dollars from 2007) has seen LG in the TV and mobile markets at least cause quite a stir. Ahn puts it down to the company's reduction in marketing spending and increases R&D department.

It wasn't long before the dreaded 'R' word reared its ugly head. Ten minutes in and there was much talk of how the recession will be "challenging in many ways" but, according to Ahn, "this is an opportunity to differentiate from competitors, so LG will be okay."

As for the products, the big phrases bandied around were 'connectivity' and 'eco-friendly' and something called TruMotion 240hz processing.

LG announced its new range of TVs, where they have seemed to have doubled most of its statistics from the year before.

Doubling processing power to 240hz means that pictures will be super-smooth, no matter if you are watching action or sports – according to LG.

The other big news is that the company's new flagship LHX 55in TV has lost a few inches off of its waistline.

In fact, LG has created the world's thinnest LCD TV, with a width of just 24.88mm – significantly shrunk from last year's whopping 105.9mm. LG has also rid the TV of pesky cables, with its wireless HDMI connectivity.

3D is the future

Just like many CES' before 2009, LG is promising that 3D is the future – LG is calling it the next big wave of 3D technology – and that it is investing in a new 3D chipset which will be integrated into its displays to make them 3D ready.

Quite when and how the company is going to do this is unknown, as the 45-minute press conference had to switch swiftly to Blu-ray players.

It seems that the US market is going to be well connected as of next year, with LG announcing that its latest range of Blu-ray players and select range of LCD TVs will come with Ethernet connectivity and streaming capabilities to Netflix, YouTube and Cinema Now. Unfortunately, there's no word when this service will come over to the UK.

This was a feature that first appeared in the company's BD300 BD player, but has been pushed over to the BD370 and BD90 ranges.

LG's last announcement was a proverbial curve ball. Previewed with the words: "It's really something you would expect to see in a 007 James Bond movie", LG then brought out a… mobile phone watch.

3G enabled, with a touchscreen interface and MP3 playback capabilities, in a year when the credit crunch is going to hit hardest, is a video watch something the average consumer really needs? LG seems to think so. TechRadar on the other hand isn't so sure.