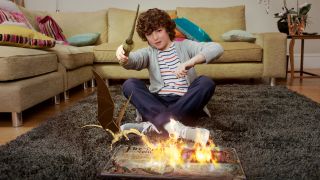 AR - not quite casting the spell on people it should be

Technology doesn't always take off the first time around. We had smartwatch hype in the 1980s, VR hype (and terrible VR-themed movies) in the 1990s and tablet PCs in the early 2000s, and none of them took off. But now they're back. They're back as Android Wear, as Oculus Rift, as iPads.

Could augmented aeality be the next tech to come back from the dead?

Augmented reality (AR) is when you put computer things over real things. That could be filling your real room with virtual furniture to see what suits, seeing information about somebody when you meet them for the first time, or flashing hygiene warnings about the greasy spoon you're considering for lunch.

It's exciting stuff, and in 2009 all kinds of people were really excited about it. AdWeek said that 2010 would be The Year of Augmented Reality, while Time made AR number 4 in its 10 Tech Trends for 2010.

Four years later, however, and AR has hardly taken the world by storm. Hands up who's used an AR shop window to try on virtual clothes, an AR app to tell you all about the person you're looking at or to automatically translate the menu in front of you? No, us neither.

There have been some interesting apps such as Ikea's virtual furniture app, which enabled you to see what its furniture would look like in your own rooms, and AR book/apps for kids such as the entertaining iDinosaur and the JK Rowling/Sony Wonderbook, but we're hardly living in the augmented future so many pundits predicted.

So why isn't it here? We asked Lester Madden of Augmented Planet, who has has been documenting the AR industry since 2009 and working in mobile tech for much longer. With key roles at Microsoft, Skype, Symbian, Nokia and Orange his CV reads like a Who's Who of tech, and while he's excited about AR's potential he's also realistic about what it's achieved so far.

Was AR overhyped too early? "Of course," he told Techradar, "but then what new technology isn't?"

As Madden explains it, we've been through an inevitable period of overexcitement "where developers simply wanted to include AR in their app for the sake of it," with developers imagining "a world where consumers would be waving their phones around at everything to find the nearest restaurant, coffee house, bar or train station. Even an app to cut a pizza into perfectly even slices."

The problem is that so far there simply hasn't been a killer app for augmented reality: while many developers believed that AR was the answer, they weren't entirely sure what the question was. "We are still in the gimmicky phase of recognising content either for the sake of it, or because - with little exception - there is an advertising campaign behind it," Madden says.