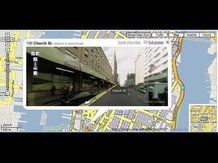 Police in America have tracked down a missing 9-year-old using Google Street View. Allegedly abducted by her own grandmother on Saturday, Massachusetts police traced the girl to Virginia using the coordinates of her mobile phone – but were unable to see where she was being held.

Enter Google Street View, which allowed officers to remotely look around the Virginia intersection where they had located her. The service showed a large building nearby, reports the Times Online, where Virginia state police were able to find the pair after acting on the information.

In more bizarre news from the last seven days, an investigation is being launched following a 'UFO' attack on a 300ft wind turbine.

Terrified Lincolnshire locals woke at 4am after a loud bang to find the turbine completely wrecked, with one of its giant 65ft blades torn off and rumours of "strange lights" in the sky running rife.

Perplexed police officers found the missing blade on the ground beneath the turbine. A UFO expert said: "We are very excited."

Meanwhile, a missing boater has been rescued by officials thanks to the light of his mobile phone. Members of the Orange County Sheriff's Office detected the light using night-vision goggles, after being called in to locate the man on Wednesday night.

The news comes a week after two missing skiers were found when rescue officials spotted the light from their mp3 player.

The gift that never stops giving

There are many inventions we should thank the Japanese for – not least this, the high-tech, wearable space toilet. Able to detect when you go, remove the waste and give you a quick clean, the wearable toilet sounds like a dream for frustrated astronauts plagued by malfunctioning space toilets.

Why, it will even eliminate unpleasant sounds and odours, apparently, when it hits the market in five years time.

We predict another sector getting in on the act. Watching back-to-back episodes of The Wire will have never been easier…

Alpine tech: who'd have it? Ski lifts, T-bars, rope tows – it's a minefield out there for the more mobility–challenged among us. If you're still getting over last year's embarrassing ski chair-related accident, spare a thought for this poor chap.