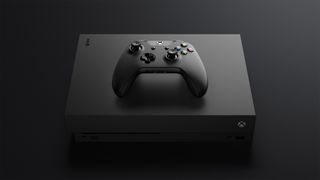 With the PS4 Pro, Sony planted the seeds of 4K gaming on consoles and with the release of Microsoft’s Xbox One X this November we’re going to see it grow. Sales of 4K TVs have increased massively in the past year and for many people gathering together the funds to purchase one is the main hurdle to overcome before they can enjoy the crystal clear resolutions of these mid-generation machines.

However, for many there will be a few more things to consider before making the jump, and an affordable 4K TV could actually end up being the least of gamer's concerns.

The majority of these considerations stem from the sheer size of the files that will be involved in playing these 4K games.

It was recently revealed that when it’s launched Forza Motorsport 7 will have an install size of approximately 100GB thanks to its 4K assets, making it one of the largest Xbox games to date.

It’s true that other Xbox games including Halo and Gears of War 4 have managed to go beyond 100GB when you take into account updates and DLC but this is an astounding file size for a brand new game being installed for the first time.

It’s unlikely that all 4K games are going to be the same size – some of them may be smaller, some of them may be larger and many are likely to increase in size as DLC is tacked on. What is likely, though, is that a combination of all these file sizes is likely to lead to the Xbox One X’s 1TB internal hard drive filling up very fast. Particularly as it looks like owners of the console will have to download the 4K assets whether they like it or not.

This means that even if you don’t have a 4K TV, if you own an Xbox One X you’re going to be downloading these 4K assets alongside the game. In fairness, we can’t really imagine why you would purchase a native 4K console and not make the most of what you can get from it. Especially since even Full HD TVs will experience improved 1080p output with the console’s ability to supersample its 4K content.

What it suggests, though, is that even before you think about getting a 4K TV for that 4K console, you should probably consider investing in a good external hard drive like this one.

Though not a free-to-solve problem, not having a large enough hard drive is a problem many Xbox One X owners will be able to solve quickly and easily for themselves.

A less easily solvable problem that many are likely to face, however, has to do with internet speeds and allowances.

Game discs are only able to hold so many gigabytes so it’s inevitable that a chunk of these huge file sizes are going to have to be downloaded.

As Microsoft has promised that all games can work across all consoles it’s likely that games released on discs will be of a standard format – the huge 4K assets will be downloaded online once the disc has been placed in the console and it’s been recognized as an Xbox One X. This won't be a full 100GB but it will only be "a bit smaller" according to a Microsoft rep who spoke to PC Gamer.

This is likely to prove problematic for those with unreliable, slow or capped internet connections.

We contacted UK internet provider Virgin Media who told us how long it would take a Virgin Media customer to download a 100GB file on 100Mbps, 200Mbps and 300Mbps connections.

Virgin told us that obviously they couldn’t comment on the networks of other internet service providers but for their customers, it would take around 50 minutes with 300 Mbps, an hour and 15 minutes with 200 Mbps and around 2 hours and 31 minutes with 100 Mbps.

Ofcom found that the average UK download speed didn’t go above 40 Mbps in November 2016 and the average US internet speed only very recently went above 50 Mbps for the first time. Considering this, it’s safe to say many Xbox One X owners are going to be waiting longer than they’re accustomed to when downloading their games.

That’s not even taking into account those who are subscribed to service providers that apply caps on the amount of data you’re allowed to consume. In households with several people using a variety of devices, the addition of an Xbox One X and its 4K download sizes could push a data cap to its limit. Paying for a higher tier of internet or an increased data allowance is rarely cheap and sometimes not even possible.

Microsoft has said that it’s developed a process of intelligent installation “which will give [developers] significant flexibility when it comes to what gets installed on a user’s console. In addition to 4K specific assets, developers have options when it comes to language specific assets as well, which depending on the title, can drastically reduce the install footprint.”

This will, however, be up to the developers to implement and a reduction in install footprints of this size will still leave them larger than normal – it’s in the very nature of 4K assets to be larger.

Though it would likely result in an increased cost to the consumer, multiple discs could be taken into consideration. But games are pushing further and further into the digital world – 4K updates and DLC that’s essentially a new game in and of itself will still prove to be problematic if your download speed is struggling.

4K gaming is an exciting prospect. We’ve seen exciting things from the Xbox One X at E3, but despite this we don’t doubt the technology is going to experience growing pains.

Sure, 4K TVs are selling more than ever and they’re expected to take a major share of the TV market by 2020, but it’s starting to look like getting your hands on the latest TV will be the easiest problem to solve.

Before 4K gaming can become a truly seamless experience that’s accessible to everyone we’re likely going to have to see improvements from internet service providers as well as file compression. In the meantime we’re just going to have to hope that Silicon Valley is actually a documentary in disguise and Pied Piper really is happening.