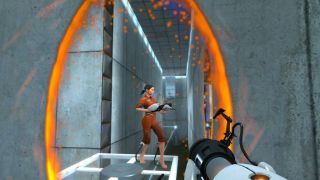 Sorry folks, no ninja game releases from Valve have been released this GDC.

It's easy to mistake the HTC Vive demo for Portal 3 - after all, where else can you find those familiar robots?

But nope, it's just a demo cooked up by the talented Seattle staff called Aperture Science.

We attended a Valve panel called "Advanced VR Rendering" which showed off a soundless example demoing the technical aspects behind the VR graphics used to make the demo.

If you need more proof, Valve director of marketing Doug Lombardi told our friends at PC Gamer the same story.

So there you have it. No new games with "3" in the title, but maybe this demo is foreshadowing the future of Steam games? Or perhaps the company is too busy with its Steam Machines.