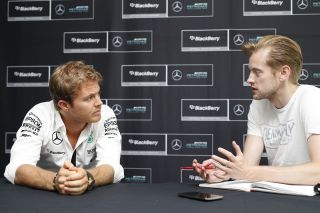 I'll be honest: when I interviewed F1 driver Nico Rosberg, the last thing I expected was to be getting pro tips on how I can break the 40 minute barrier for a 10K race.

But when I walked in, all ready to ask questions about BlackBerry and home automation, he immediately asked: 'What watch is that?'

I was wearing the Garmin Forerunner 920 XT – it turns out that he was a triathlete and had its predecessor, the 910 – and in a few seconds he was tapping through the interface.

'It looks fake!' he exclaimed, before I - sulkily - told him that it was just the watch face I downloaded so I could have too much information on the screen.

Then came some information I didn't expect: this top athlete has given up on fitness technology altogether:

"At one point I had all my watches and everything was documented, all the graphs etc, and I would always train according to my zones," he said.

"But for the last couple of years I've removed everything, and I do it all by feel. It works great."

I was confused. Why would someone who needs to get the absolute maximum out of their training give up on that level of information when it could give them an advantage?

"I don't know – it just came gradually," he admits when I quiz him on the switch.

"I really don't know what made me change. In the morning I'll still check my resting heart rate because that's a really good indication for me – I know exactly that if I'm over 51 [beats per minute] it means I'm tired. If I'm in the 40s I know I can hit it again. That's pretty important."

So that led me to the question that ate up valuable minutes of the interview I was supposed to be conducting about technology in the F1 team – but I had to know. How would he train to break the 40 minute barrier in a 10K race?

"I've done 38 minutes for the 10k – and that was up and down hills," he said, without smiling. I felt deflated. But at least he told me how he did it.

"With that distance it's very easy: all you need to do are intervals.

"Don't bother doing any long stuff. You build it up with intervals. Begin with half a km fast, then half a km slower. Then [the next session] you go 750m up, 750m down, just two times.

"Then do a single kilometre at a slightly faster pace then cool down, then it's up to 2km with a lot of space in between."

I tell him I'm a fan of throwing hill intervals into the mix to help strengthen my legs and really get the heart working.

I assume that he'll be impressed at my tenacity, probably invite me to go for a run where he nods approvingly then we go to a yacht party or something.

"Hills – no, because if you don't have a hill in your 10k then there's no point in doing it. It's a different thing. It's better to just go a bit quicker on the flat."

Ego deflated, I ask the one thing that worries me about dropping the watch: how do you know how fast to run these intervals to get me under target?

"Just go until it hurts at the end – so what's that going to be? Yeah, above race pace. It will be 3m50 seconds or something.

"Eventually you need to get to the point where you're doing a kilometre, two minutes cool down, and then repeating that a few times.

"Then go to two kilometres and so on - bringing the recovery gap down in between and you're good to go. Intervals all the way. That's the solution."

Now I'm back on the trail of beating my 10km target, I've been thinking about the technology that I'm going to use to get me there.

Well, I was before Nico started telling me I'm doing it all wrong, but like a good like runner I'm ignoring the advice that I don't like and just doing what I was going to anyway.

I've been using the Garmin 920 XT for a few months now – I'm in love with the accuracy and feature set, but more importantly the battery life. It just goes on for days and days.

However, the brand isn't as good at setting up plans to get me running faster. Which led me back to 'my first' – the Adidas MiCoach system. There was a time when I was religiously stuck to first the app then the MiCoach SmartRun running watch.

All my data was on there, it had an integrated heart rate monitor and the watch could wirelessly sync all my data to the servers through Wi-Fi, rather than the bulk of other options that needed a PC connection, meaning they sat there swelling with unchecked runs for months.

The key thing that brought me back was the sheer range of plans on offer here – whatever you want to do, be it running, football, tennis or myriad other sports there's a set of workouts specifically for you.

And within that there are different levels and goals – including one to shove you under 40 minutes for a 10K race.

On top of that, the other feature I like about the system is that it'll build you a strength program too, which is precisely what I want to be adding into the mix to get me stronger and thus faster and thus more the kind of guy that guffaws and stands around talking about manly things, rather than giggling over a Bacardi Breezer.

However, that's when things started to unravel. Firstly the plan I had mapped out for me, which has a range of run types involved from long endurance sessions to interval training, seemed to lack the 'Rosberg factor' – ie, longer and longer workouts at faster than race pace speeds.

I get that each brand does things differently, with alternative ideas to get people moving, but I feel the need to get my speed on. So I'm going to fuse the MiCoach plan I've got with some elements of this one from Run Britain, which is a little harder.

And that's my undoing. I've gone in all guns blazing, doing strength sessions in the morning and running in the evening, and three days in I've already made my hamstrings more sore than they've ever been in my life.

What's worse: in order to keep the fitness up I was forced back into the pool for some low-impact swimming. I still hate swimming with a fiery passion.

Upshot: don't push to hard at the start. Ease into it or, before you know it, you'll be shoved into a wetsuit and made to swim down the Thames.

If you're an avid runner, you'll know this refrain when talking to your friends about the fun of jogging around all the time: 'I should do more running,' they'll say, usually while having a cheeky Vimto.

Then you try and entice them out onto a quick jaunt around the park, and suddenly they've got a hamster to take to the vet or buy new rubber feet for the fridge.

Except one of my friends finally caved in – she'd always wanted to do a 10K, and three weeks ago asked me to help her get ready for the race in early September, despite not having done much in the way of running before.

Being the good little tech-fiend I am, I signed her up with MiCoach (so I can track her runs and alter her pace targets accordingly – I'm in no way taking diabolical pleasure from that) and given her a FitSmart heart rate monitor to add into the mix.

It's going to be interesting to see how she gets on – will the app help or hinder? Will the structured plans be easy to follow or a confusing mess? And will the FitSmart, a band designed for the new exerciser, prove to be a useful addition?