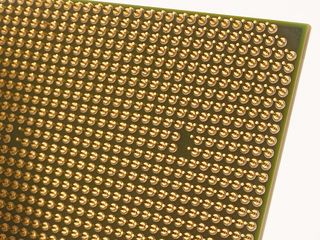 Two dual-core Opteron processors are used in the &quot;Teraflop in a box&quot; technology concept

Last month, Intel showed off its 80 core chip capable of handling a trillion calculations per second, or one Teraflop. As a brusque reflection of the current status quo in the microchip industry, AMD has now showcased its own Teraflop design.

A Flop - or Floating point Operations Per Second - is a term usually applied within a supercomputing context, but AMD says this latest breakthrough shows promise for applications much further down the food chain.

A Teraflop home PC is unlikely anytime soon, but as a proof-of-concept both CPU vendors have shown that the idea is at least possible. Still, it's a long way off. A Teraflop is ten-times the performance of most high-end servers that handle around 100 billion calculations per second.

AMD didn't turn down the opportunity to, once again, pitch the 'New' AMD - a supposed reflection of its acquisition of ATI.

"The technology AMD demonstrated today is just one example of how the 'New' AMD is changing the game for our industry," said Dave Orton, executive vice president of visual media business at AMD. "Now that 'Teraflop-in-a-Box' is a reality, AMD can deliver an order of magnitude increase in performance."