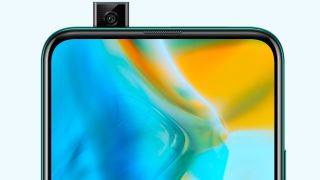 The Huawei P30 has a notch, the Huawei Nova 4 has a punch-hole camera, and now with the newly announced Huawei P Smart Z, the company has a phone with a pop-up camera.

The pop-up 16MP selfie camera means there’s no bezel above the screen, and in fact there’s very little below it, giving the phone an all-screen look.

Aside from being the company’s first phone with a pop-up camera, the Huawei P Smart Z looks fairly ordinary on paper, but the specs are reasonable.

The phone is powered by a mid-range octa-core Kirin 710F chipset and 4GB of RAM, it has 64GB of storage, a microSD card slot, a 4,000mAh battery, a rear-mounted fingerprint scanner, and it runs Android 9 Pie overlaid with Huawei’s EMUI 9 interface.

So far the Huawei P Smart Z is only available in Spain and Italy, where stores are listing it for €279 (around $310/£240/AU$450) but we wouldn’t be surprised if the phone makes it to the UK. A US release though is very unlikely given Huawei’s issues in the country.

TechRadar has reached out to Huawei to find out if they have any plans to bring the phones to the UK, and we'll update this article when we find out either way.