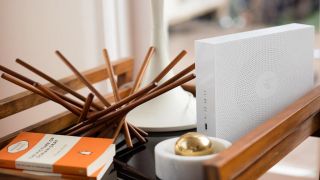 Telstra announced plans to release a hybrid 4G home modem router that’d include an integrated 4G SIM and a fixed-line connection last year in August, to be launched early in 2017.

True to its word, the Aussie telco has actually followed through, with the Telstra Gateway Frontier available as of today to customers using or signing up for Telstra’s ADSL, cable and NBN plans for $216 outright or on a 24-month plan for $9 a month.

Touted by Telstra as the world’s first all-in-one modem router, the new Gateway Frontier is a dual-band 802.11ac device with MU-MIMO, two USB 3.0 ports, four Gigabit Ethernet ports and NFC capabilities, and it supports up to 20 simultaneous wireless devices.

Telstra’s hoping that the router, designed in partnership with Australian design consultancy firm Design + Industry, looks fabulous enough that you’ll be happy to display it in your living room, or anywhere else in the house, instead of keeping it hidden away like most other routers. (We’ll let you decide if it passes the style test or not…)

And the company says it’s easy to set up, too – it just needs to be plugged in and it’ll will connect to Telstra’s 4G network within minutes, so even if your fixed-line service isn’t yet ready, you’ll still have an internet connection.

Even moving home and waiting weeks for a fixed connection should now become easier to bear.

That backup connection to the telco’s 4G network aims to make any future internet outages a thing of the past too – in case of any service disruption, the router will automatically switch to the 4G connection, keeping you connected until the issue can be resolved.

Telstra’s Executive Director of Home and Business Products, Stuart Bird, explained, “Many customers have told us being without a home broadband service for even one hour is disruptive, so we are introducing a solution that enables them to stay connected to the things they love to do online within minutes of plugging their home gateway in.”

But it is important to keep in mind that, despite launching the Gigabit LTE network, customers using the new Gateway Frontier router won’t actually get lightning-fast speeds. Download speeds on the backup 4G network will be limited to 6Mbps with 1Mbps upload speeds.

And with Telstra recently suffering a serious service outage due to a fire at a Sydney exchange, it’s worth remembering that even mobile 4G networks aren’t infallible...