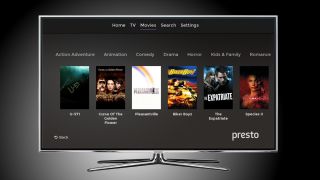 Presto has been taking strides recently, clawing back some of the headway Stan and Netflix have achieved since their launch with a Quickflix resale agreement and new content deals that significantly expanded its library.

Today the Foxtel and Seven West Media joint venture secured another milestone by providing an a native app for Samsung smart TVs.

Unless you had a Telstra T-Box, you had to cast Presto to your living room TV using a Chromecast, but the new app will allow Samsung TV users to cut the extra casting step and access all the Presto titles directly through their compatible TV.

And Presto … It's on all the Samsung TVs

Leveraging Samsung's entire catalogue of TVs purchased since 2012, the Presto app is available to download for free from Samsung Apps through the Samsung Smart Hub.

The company also stated that it has even more up its wizard sleeve and will be announcing more compatible devices soon.

Though the service cut some of its big titles – including HBO's superb Boardwalk Empire recently – it picked up a solid collection of new TV titles that make it a lot more appealing in the competitive Australian subscription streaming market.