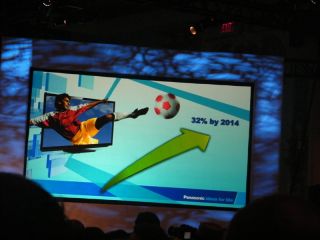 3D is here and it's not going away

Panasonic has predicted that a third of all new TV purchases will be of 3D models by 2014.

To say that Panasonic is throwing the kitchen sink at 3D would be an understatement, and it seems that consumers are going to end up with 3D TVs in their homes eventually whether they like it or not.

Perhaps the most exciting technical innovation in all of Panasonic's new products – which includes the Android-toting Viera Tablet – are the incremental improvements in the company's premium VT30 range of high-end 3D TVs.

Kitajima says that Panasonic has been able to use new phosphors to increase the light output of its plasma panels by 30 per cent, while cutting power consumption by 20 per cent.

Panasonic's plasmas are known to be the best TVs at limiting the intrusion of crosstalk, but its pictures can be less dazzling than Direct LED 3D TVs because the plasma panels emit less light - until now?

We'll take a look at these new TVs at the show tomorrow and we'll let you know what we think.