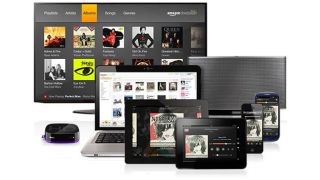 Amazon may be taking on more than just Netflix with its content streaming ambitions, as the company is reportedly in negotiations to deliver music to its Prime subscribers.

The online retailer is in early but "serious talks" with major record labels in an effort to launch a music subscription service, according to Recode citing unnamed industry sources.

Amazon would therefore be in direct competition streaming services like Spotify, Google Play Music All Access and the freshly launched Beats Music.

Right now, music that's downloaded from Amazon.com can be streamed through the company's Cloud Player, but it's only a music locker meant for purchased songs. It stops short of streaming tracks for free or a fee.

If Amazon is able to sign with enough record labels, its music streaming service is expected to be bundled with Amazon Prime, rounding out the company's subscription benefits.

However, that could also mean Amazon is looking to justify a possible price increase that it kept mentioning for the US during its latest quarterly earnings conference call.

Amazon has refused to address whether or not it would split its Prime offering for people who enjoy two-day free shipping but never use its movie streaming capabilities.