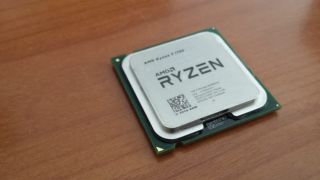 Scammers are cashing in on the popularity of AMD’s new Ryzen processors, with reports of fake CPUs being sold on Amazon.

There’s nothing new here in actual fact – there’s been a long and unfortunate history of selling cheap processors in the packaging of more expensive models – and in this case, as PC Gamer reports, there have been several incidents where customers have ordered a Ryzen 7 1700 CPU on Amazon and have received an Intel Celeron chip instead.

The fake Intel CPU comes in AMD’s correct packaging and has the Ryzen logo on it, but a closer inspection of the product reveals that logo is just a sticker. There are other clear clues that this is a fake, including the fact that there are no pins on the bottom of the chip, and the wrong heatsink is bundled with the processor, plus the package the chip came in has obviously been tampered with.

Such fakes – which have also been reported elsewhere on the net – may have been purchased from third-party sellers on Amazon Marketplace, or may have been bought directly from Amazon itself. Not that the retail giant is trying to scam folks, of course, but it’s selling products which have been returned (and the original buyer has switched the processor for an old cheapo model before returning it).

Nothing is all that clear here, and at this point, it seems likely that both the above possibilities could be the case.

There’s even discussion on Reddit of this being some kind of large-scale fraud operation, although it’s too early to draw any conclusions like that in our opinion.

At any rate, in the case of that particular Reddit thread, Amazon quickly sorted things, implementing a full refund and giving the buyer a gift card as well, by all accounts.

So, if you are buying a Ryzen processor on Amazon – or indeed from a third-party seller on another site such as eBay – this is an issue clearly worth bearing in mind.

Of course, when using a third-party seller, it’s worth choosing one with a large amount of positive feedback (although as mentioned, these counterfeit processors can potentially come direct from Amazon – as resold returns – as well).

This sort of scam has been pulled off with graphics cards in the past, as well, and in far more sophisticated forms with CPUs. In this case, at least the fakes are crude and easily spotted, plus of course the counterfeit chip won’t even fit in a Ryzen socket on the motherboard.