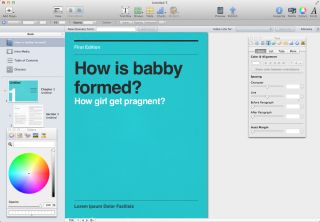 Something to do with storks, I believe

Authors' books are their own again, as Apple has changed its iBooks Author end user licensing agreement (EULA), now allowing users to sell their books elsewhere.

The clarified terms now state that although you can't distribute the .ibooks file anywhere but through iBooks, you can still tout your actual words around elsewhere.

"You retain all your rights in the content of your works, and you may distribute such content by any means when it does not include files in the .ibooks format generated by iBooks Author," the terms now say, accepting at last that we don't all exist solely to make Apple money.

Previously, the EULA demanded that any books being sold for money be sold only via Apple, saying, "If your work is provided for a fee… you may only distribute the work through Apple."

Writers understandably took affront to such over-zealous terms – after all, who wants to slave away for years on their opus only to hand the rights to it (and 30 per cent of the income from it) over to a Californian tech company?

Now you can slave away for years on your opus and hawk it via iBooks as well as through Kindle, Kobo, self-publishing and by selling snippets on your internet weblog. Good luck.

From TUAW via Engadget