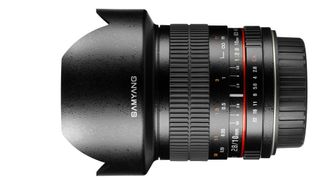 Korean lens manufacturer Samyang has announced the a new 10mm lens with a maximum aperture of f/2.8, the 10mm f/2.8 ED AS NCS CS.

It will be made available for a wide range of APS-C format cameras and its 109.5 degree field of view will produce an effective focal length of 16mm on Canon cameras and 15mm on Nikon models.

The lens is corrected to give rectilinear rather than fisheye images.

According to the manufacturer, a focused development program has been employed to obtain the highest possible optical performance while keeping size down.

It is designed for architectural photography, specifically when shooting indoors and space is limited, as well as landscape photography.

Inside the lens are 14 elements divided into 10 groups, with 2 aspherical AS lenses and one lens made of extra-low dispersion glass.

The new lens is the first from Samyang to feature a nano crystal anti-reflection coating. This reduces reflection and flare, improving light transmission and boosting contrast to deliver better optical resolution.

The lens will be available from the end of January 2014 in the following mounts: Canon EF-S and EF-M, Nikon F, Pentax K, Sony A, Fujifilm X, Samsung NX, Sony E, Four Thirds and Micro Four Thirds.