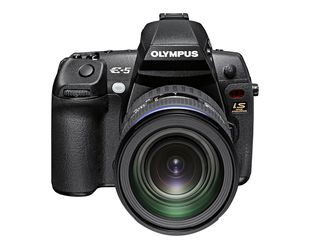 Is a successor to the E-5 in the works?

Olympus has confirmed that it is looking at a successor to the Olympus E-5, its last DSLR, which was announced in 2010.

Despite the fact that the company has only just launched its advanced compact system camera in the form of the Olympus OM-D E-M5, Olympus is very keen to point out that it does not consider the E series line-up of cameras to be dead.

The OM-D has been described as being targeted at advanced enthusiasts, leaving professionals with E series DSLR cameras.

The last time Olympus announced a new DSLR was back in 2010, with the E-5. At the time, the company said that it could be the last in the line, or at least it that future E-series cameras that accept Four Thirds lenses could be mirrorless.

But the company appears to have done a U-turn in that decision. Speaking to a Russian website, Onfoto, Toshiyuki Terada from Olympus Japan said, "We already have started studying a successor of Olympus E-5."

Last week, Terada told us Olympus would consider a pro version of the OM-D if there was enough demand.

Many people have assumed that Olympus has "given up" on its DSLR products to concentrate on its Micro Four Thirds line-up, but Terada told us that this was not the case.

"Our first priority has been with the PEN, because at the time of its launch, DSLR was so popular and we wanted to distinguish ourselves."

It's likely that some of the features of Olympus Micro Four Thirds cameras would also appear on any new DSLR, such as the new 5 axis image stabilisation as available on the OM-D.

Keep following for more updates on any new camera releases as they happen.