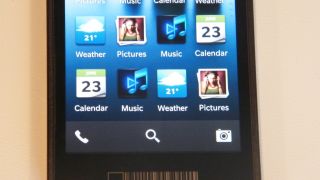 The BlackBerry team at RIM is hard at work on BlackBerry 10 and we've had a chance to see the latest version of the software on near-final models of the first two handsets to launch.

These are an all-touch device with a large screen (the same 4.2" size as the BlackBerry Developer Alpha device developers are using and (despite some rumours) a more traditional QWERTY BlackBerry that has a square touch screen.

They will be the first of six new devices to launch in 2013, and they'll be launched at the same time but the QWERTY model will be available a short time after the initial touch device.

The two handsets we've seen are the premium handsets but there will be touch and QWERTY devices for the mid-range and budget markets, so there should be a BlackBerry 10 handset to replace all the BlackBerry models on the market now – except perhaps the combination –large-screen-and-QWERTY Torch.

Although RIM doesn't want to share many details of the specs of the new devices, what we saw is close to the final design, though not the final "fit and finish" . That means the launch date isn't waiting on the handsets and will be a combination of when the software is ready and not announcing when the news would be swamped by announcements from competitors like Apple, Nokia and Samsung.

That also suggests launching before the mass announcements of Mobile World Congress.

Another familiar BlackBerry feature persists in the new handsets. Unlike an increasing number of smartphones, the new BlackBerrys will still have a back you can take off and a battery you can replace, so if you absolutely have to stay powered up all day, you can carry a second battery to pop in when you need it.

A removable back has another advantage; much like Formula One cars that are designed to break up on impact to dissipate the force of a crash, having a back that can fly off when you drop your phone actually reduces the chance of damaging the screen because it's somewhere for the impact to go, other than the glass.

As promised, the screen resolutions of the devices will be 1280 by 720 for the touch devices and 720 by 720 for the QWERTY handsets. That's different from the 1280 by 768 of the BlackBerry Developer Alpha handset we saw in the spring, which is what RIM has been handing out to developers.

At least because it's slightly smaller, developers can make their apps smaller than the Developer Alpha screen to see the final effect and even with this change it's definitely going to be easier to develop for multiple BlackBerry devices because there are only two resolutions to deal with. In the past the screen size and resolution of almost every new BlackBerry has been slightly different.

RIM is still working on the final look of the interface, but it's keeping the navigation metaphors we've already seen demonstrated of flowing from one application to another to see related information and glancing at what else you have running to keep track of what's going on. The QNX kernel should make the multitasking this requires run smoothly.

As you'd expect, RIM is building on the work it did for the new applications in the PlayBook 2.0 OS as well as on the familiar BlackBerry OS unified inbox. Plus it's creating BlackBerry 10 versions of key tools that didn't make it onto PlayBook like BBM (which is now run by the same team (originally from acquisition Gist) that built the messaging apps for PlayBook 2.0.

Again, we can't go into details but trying this out is a slick experience that doesn't feel particularly like a pre-release system and gives us more confidence that BlackBerry 10 may be able to compete.

Interestingly, the new head of BBM and social networks, T A McCann told TechRadar recently that the BBM team will be keeping up the hard work after the release of BlackBerry 10 with "a proper agile development cycle" and he's aiming to have a new release of BBM tools "with not just bug fixes but new features" every two months.

That should keep things feeling fresh and up to date - once you can finally get your hands on BlackBerry 10.