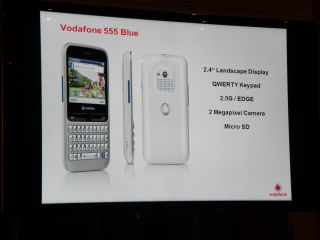 Vodafone's group terminals director has told TechRadar that the new 555 Blue is the first in a line of non-smartphone Facebook devices.

Patrick Chomet confirmed that the network is looking to replicate the deep integration on the 555 Blue on other handsets:

"What we will do continue to use the experience as a category, the Facebook, as a vertical experience, and probably we will do a version two, version three etc.

"We are working already, could work on the same thing and extend it to a touchscreen.

"So we are working on and looking at various things [for future Facebook devices], such as touchscreens, 3G connectivity, nicer designs, better camera - now we have the core working, and hopefully it's a success, we will take it and develop it further."

When quizzed about the decision to eschew Android, Chomet said it was a hard choice but one that offered the chance to make something that created a deeper Facebook experience than ever before, and offers easy replication:

"It's not easy to do [to create a feature phone based on Facebook], you could always just do the app but we wanted to do it this way and we've had our guys plugged in with Facebook engineers for one year.

It will be interesting to see how a dedicated Facebook device, which is likely to be a little higher on the pre-pay scale at around £70-£75, will fare compared to the do-it-all smartphones users are increasingly flocking to when choosing their next device.