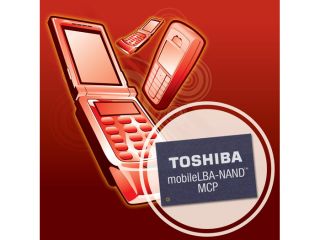 The latest memory-chip development, announced today in Japan and the US by Toshiba , is a breakthrough in chip architecture. It should lead to mobile phones with more compact designs and even more memory for file storage.

To boil the technical details down slightly, Toshiba's new mobile LBA-NAND flash memory modules include two kinds of flash memory on the same chip for the first time. One is used for storing programs and the other for holding the data those applications use.

The first kind is single-level cell (SLC) memory that allows the high-speed access needed to run programs efficiently, while the second is known as multi-level cell (MLC) memory. MLC is generally cheaper to make and packs more storage into a given physical space. So it's perfect for storing photos, video clips and music.

Until now, phone designers had to use either only the more-expensive SLC or to factor in space for chips of both kinds. Toshiba's new NAND chip allows them to decide how much of each kind of memory they need in a single package. The first generation of chips will be available this summer and will run up to 8GB in total size.