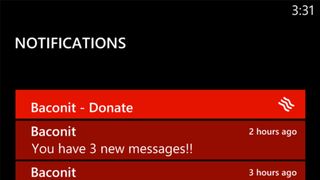 An early version of the WP notifications app?

Microsoft may be preparing to add a notifications centre feature to a forthcoming Windows Phone update, judging by a test build of the OS which has reportedly broken free.

A Reddit user claimed to have purchased a Nokia Lumia 920 handset from eBay containing an internal, unreleased version of the software that may be the first look at the Windows Phone Blue update.

The screenshots captured by the Lumia owner show the notification centre, the ability to organise apps into a 'most used' category, as well as a newly-modified calendar app that shows a weekly view.

It also looks like Microsoft is testing an improvement to Windows Phone multitasking, allowing users to close down apps by hitting a cross when swiping through the apps in use.

It's entirely possible that this handset features a host of test apps that may go no further, but Microsoft has been plotting a notifications portal for some time, saying it 'ran out of time' to get it done before WP8.

Windows Phone Blue, an update expected later this year, would be the most likely time to introduce the feature perhaps the Reddit user has his hands on an early build of the software.

Naturally, Microsoft has declined to comment on the 'rumour and speculation.'