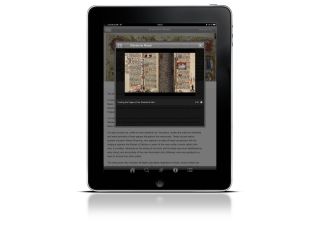 The British Library has released its first iPad and smartphone app, compatible with iPhones and Android mobiles.

The app makes some of the world's rarest and most unique printed works available online via your phone or tablet for the first time ever.

Treasures in your phone

The British Library's 'Treasures' app has been developed in conjunction with Toura, makers of a technology platform for mobile guides.

Among lots of other content, the 'Treasures' app, will feature items featured in the Library's Sir John Ritblat Treasures Gallery.

"Treasures will provide a truly multimedia experience including over 100 of the Library's greatest collection items, 250 high-definition images, over 40 videos providing expert commentary, textual interpretation for deeper understanding, as well as up-to-date information about the Library's current exhibitions," reads the British Library's launch announcement.

"Through the app users will experience an up close and personal experience with some of the Library's most unique items, such as the first edition of Alice's Adventures in Wonderland, the world's oldest bible Codex Sinaiticus, Nelson's Battle Plan, written before his victory at Trafalgar, Galileo's letters and Leonardo Da Vinci's notebooks.

"Expert commentary is provided on many of the items and users can watch, for example, videos of explorer Ben Fogle talking about Scott's Diary and Linguist David Crystal discussing the 1,000 year old poem Beowulf."

Fans of Charles Dickens and Jane Austen will also be able to read the first ever handwritten draft of Nicholas Nickleby, as well as a selection of Austen's teenage writings.

"Key historical documents include 2000-year-old Oracle Bones from China and an original Magna Carta of 1215. The section devoted to music includes manuscript scores from some of the best-known classical composers, such as Handel, Purcell, Mozart and Schubert, alongside hand-written lyrics by The Beatles."

Treasures will be available to download on iPhone and iPod Touch, in the iTunes App and in the Android Marketplace for £2.39, with a HD version for the Apple iPad priced at £3.49 http://apps.toura.com/british-library/treasures or http://www.bl.uk/app