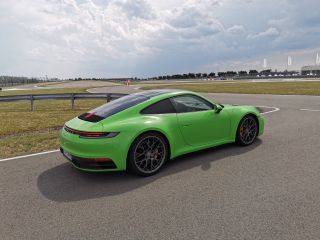 Porsche showed off their latest generation 911 Carrera range at a drive event in Germany. These next-gen models draw heavy inspiration from classic 911s of past bringing the same quintessential 911 shape, cylinder count and layout. It is discernible only by a sleek strip of light across the rear and the tech-y digital readouts that line the interior.

Drivers will be able to choose between the rear-wheel drive Carerra S and the all-wheel drive Carrera 4S, available in both the traditional Coupe and top-down Cabriolet variants.

Design wise, the next-gen 911 Carreras have Porsche DNA infused through and through. The outside still retains the classic 911 shape and a pronounced bonnet. While the wider spoiler and pinstripe light on the rear add a dash of newness. The use of electrical pop-out handles makes the form come off as smoother and more contoured.

Over to the front there are LED matrix lights if you choose to go for them, which include the Porsche Dynamic Lighting System (PDLS). The matrix itself is made up of 84 LED lights and uses range and intensity to generate a light beam that distributes optimal light for the driver without annoying passers-by.

For those who are more into open-air motoring, the next-gen Cabriolet brings a lightweight roof with a more streamlined design befitting the curvature of a Coupe and promises smoother operation. It’s a an all-new hydraulic roof that can raise and/or lower itself in 12 seconds at speeds up to 50 km/h. An electronically operated wind deflector helps reduce wind noise as you dash along.

On the inside, the seats have been heavily modified. The dashboard is decked out with digital displays including adjoining frameless displays that accompany the family central rev counter. A 10.9-inch wide display sits front and center with a five-unit switch underneath allowing users easy access to the enhanced Porsche Communication Management system.