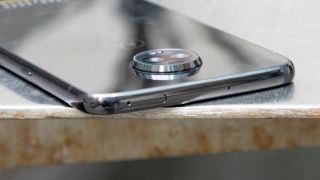 Phones being listed by retailers before they’ve been announced isn’t totally unheard of, but the Moto Z4 wasn’t just listed on Amazon, it was seemingly sold and shipped to a customer.

The listing has of course been removed, but someone going by the username JETFIRE007 received the handset and posted information on Reddit and a hands-on video on YouTube, so we now have a very good idea of what to expect from the Moto Z4.

As you can see in the video, the design looks much as we’d expected from rumors, with a small notch at the top housing a single-lens camera, and a tiny bit of bezel below the screen.

On the back there’s another single-lens camera, this time in a circular camera block, and lower down there’s a Moto Mod connector. Notably the phone also has a headphone port.

While we’d take all of this information with a pinch of salt, it looks likely that the specs and design shown here are accurate. And as the phone already appears finished and was listed for sale – albeit accidentally – we wouldn’t be surprised if it’s announced soon.

It might not be alone either, as Amazon also had a listing for screen protectors designed specifically for the Moto Z4 Force – another unannounced handset.