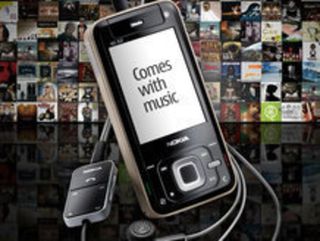 Nokia's Comes with Music service is now cheap as chips

Is this a sign of Nokia trying to rally its Comes with Music application by getting it into the hands of more consumers? Retailers are dropping the price of the first handset to carry the service, the 5310 XpressMusic, which comes with 12 months' unlimited downloads.

The Carphone Warehouse was the first to bring the price down, from £127.18 to £82.18, but now PrePayMania has gone one better by announcing the handset for just £74.99.

Although more phones are available with a CwM variant - the N95 is currently on sale and the N96 is coming soon - there has been a notion that all might not be what it seems after the Tube, AKA the 5800 XpressMusic, was mysteriously announced without the service.

Given that it was billed as something as a flagship device for the service at the Remix event last year, it's a bit strange that it would appear without CwM baked right into the phone.

But after contacting Nokia, TechRadar was told that the company wants to make sure it's 'absolutely perfect' before placing CwM on the device... so we'll just have to take its word for it and wait for the announcement of the 5800 XpressMusic that actually 'comes with music'.