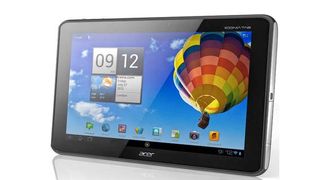 The Acer Iconia A510 tablet hit the market today and features the latest Android 4.0 Ice Cream Sandwich OS and quad-score Tegra 3 processor. What's more, it's hoping to give its rival, the Asus Transformer Prime, a run for its money.

Asus, whose Transformer Prime tablet became the first to arrive in the US, also features a quad-core Tegra 3 processor.

While the Asus Transformer Prime may have been first to market with a Tegra 3 processor, Acer's followup largely matches the competition - as long as you don't need the optional keyboard dock, which is currently an Asus-only offering.

The Acer Iconia Tab A510 is the company's followup to last year's Iconia Tab A500, but the manufacturer is kicking things up a few notches by bringing Android 4.0 Ice Cream Sandwich to the 10.1-inch tablet, along with 32GB of storage and a beefier 9800mAh battery - all for $50 less than a 16GB new iPad.

Acer's focus may now be on the newest model, but the company plans to tip its hat in appreciation of those who purchased last year's Iconia Tab A500 and Iconia Tab A100, which will both receive a free update to Android 4.0 Ice Cream Sandwich rolling out in the US starting on April 27.

Iconia Tab A100 users in Latin America will actually get their updates a couple days early on April 25, while Canadian A100 owners will have to wait an extra few days until the May 3 rollout.

The Acer website has all the details for those who don't plan to upgrade to the latest hardware.

Via: The Verge, Acer