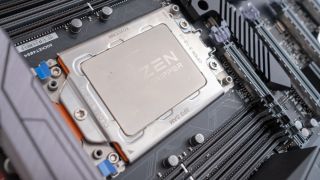 AMD’s 32-core 3rd-Gen Threadripper CPU has popped up again in an online benchmark which appears to show that this processor outperforms the previous generation flagship by around 30%.

This purported incoming chip has previously been spotted in Geekbench results, where it was codenamed ‘AMD Sharkstooth’, and now the processor has been found in the UserBenchmark database.

In this new benchmark spotted by prolific leaker TUM_APISAK, the (likely next-gen flagship) 32-core CPU is marked as ‘ES1’ meaning it’s an ‘engineering sample’, and possibly an early one at that (given the number 1 designation, with these sample chips usually getting later versions, too, ie ES2).

At any rate, bearing that firmly in mind, it shows a Ryzen Threadripper 32-core processor running with a 3.6GHz base clock and 4.2GHz boost.

Because it’s an early sample, these may not be the final speeds of the release product (of course, assuming this benchmark result isn’t falsified in any manner, too – it could be completely made up for all we know).

As for the UserBenchmark score, the freshly leaked processor hit 5,649 points in the multi-threaded test, and by all accounts the incoming CPU is around 30% faster than the 2990WX going by this result.

And remember, of course, that as we’ve already mentioned this is still an engineering sample, so won’t likely represent the full range of power that the Sharkstooth chip might hit.

Previous Geekbench leaks pointed to an increase of around 35% on the 2990WX, so these look to be excitingly healthy gains to say the least.