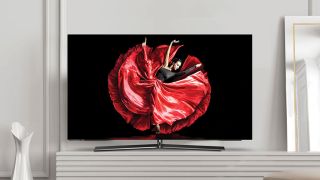 Announced at CES in January this year, Hisense's Australian-exclusive and highly-anticipated 4K OLED television has finally made its way into stores across the country.

Available in both 55-inch and 65-inch models, the Hisense OLED TV features the pure blacks (0.0005 nits) and infinite contrast afforded by organic light-emitting diodes, HDR10 and HLG support, and a refresh rate of 200Hz.

According to the product page on Hisense's website, the OLED TV has an image algorithm that upscales 1080p videos to near 4K quality.

Hisense's OLED TV also runs on the latest version of the company's smart TV platform, VIDAA U 2.5, and can be controlled from your iOS or Android smartphone by using the RemoteNOW app.

Super slim and sporting a bezel-free design, the stylish Hisense OLED TV comes with a metal stand and is priced at $3,499 for the 55-inch model and $4,999 for the larger 65-inch version. It can be purchased right now, only from Australia's major retailers.