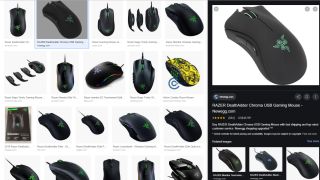 Google has given its Image Search an makeover, and turned it into yet another way to sell you stuff. At first glance, the new Image Search looks familiar, but when you click on a product you'll now be shown prices and information about where to buy it.

Google began testing a similar feature in March, which it called 'shoppable ads'. In the initial trials, only broad search terms like 'home office ideas' or 'abstract art' would deliver prices and product links, but now virtually any search will return shopping results.

If you click a picture that isn't a product (a person or a location, for example), Google Images will produce the same information as before the redesign, but in a sidebar on the right that doesn't obscure the list of thumbnails.

The focus on shopping isn't the only change for Google Images; scroll down a little and you'll notice that Google has borrowed an idea from Bing's visual search by adding links to 'related searches'.

However, unlike Bing, Google hasn't brought back the 'View Image' link, which allowed you to see a picture in isolation without visiting the page on which it's hosted. Google removed the button last year in an attempt to prevent copyright violations

The change followed a complaint by Getty Images, which claimed Google was “creating captivating galleries of high-resolution, copyrighted content" and giving them little reason to visit the site where it originated.