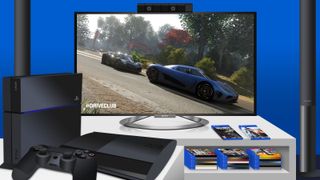 What was the last great driving game you played? For me, it was Driver: San Francisco.

Its driving model rocked and swayed with tremendous poise, Frisco itself was a curated vision of seventies movie car chases – oh, and it let you, a comatose cop, travel between people's minds like a cosmic parasite.

A coma chameleon, if you will.

Ubisoft Reflections got all the fundamentals right, and bonded them to a unique concept. And it still didn't get the sales that a passable shooter might expect.

So where does that leave Driveclub, a meticulously detailed driving game, but seemingly also one with traditional race/checkpoint dash core content? Are pretty graphics really all it needs to cut it on PS4?

Sony apparently didn't think so. According to Sony Worldwide Studios America software product development head Scott Rohde (his business card must look like a tape measure), Evolution Studios went "back to the drawing board" after Driveclub failed to reach an acceptable level of quality and was pulled from PlayStation 4's launch window.

That's not a phrase industry people like to use, because it makes you imagine the developers literally hitting the delete key on their terabytes of million-poly car models and starting the game from pre-production again.

Obviously that isn't the case here, but nonetheless it implies something was fundamentally wrong at design document drafting stage. Like what?

We're into speculation territory. Neither Sony or Evolution is going into any further detail about the delay, so your guess is as good as mine. Let's both say our guesses on three. Ready? One... Two... thr- outdated concept.

Driveclub's USP centres around community racing. You form clubs, race in team colours, compete for pride of place against other clubs on the leaderboards, and there's your problem.

It isn't a new concept. It's an old concept with a social media slant. Even the hashtag Sony styles the game name with comes across as a kneejerk lunge for relevance in a rapidly changing landscape. Like your dad's Facebook profile.

#Driveclub's team checkpoint races? Well, exactly. Existing within the groove doesn't exclude a game from eliciting pleasure, but it also doesn't make it a go-to ambassador for a new generation of driving games, and maybe that's the nucleus of its delay.

Maybe I'm wrong, and Evolution just never showed its radical new take on online race modes because they simply weren't ready to show. I genuinely hope I am, because the environments and vehicles themselves look more than worthy of next-gen hardware.

I have every confidence that a team like Evolution, a hotbed of talent with devs from just about every decent racer in the last twenty years, can deliver a great handling model. But whether they've been given the creative freedom, budget and time to tread new ground is an entirely different matter.

Traditionally driving games have two plans of attack: official licensing or wacky idea. F1 2010 had more problems than Jay Z when it came out, but I sank a hundred hours into it anyway because what was I going to do, not play the first fully licensed F1 game on PlayStation for years?

On the other side of the spectrum, Flatout had no licensing, but all the destruction. You couldn't even turn on the ignition without a tire wall being smashed to bits somewhere nearby.

You need only look at developer Bugbear's next car game, um, Next Car Game and its Steam Greenlight success to see how much people appreciated that different approach within the genre.

The industry as a whole grew more cautious last-gen, and clung more anxiously to the idea that a sequel will always generate at least half the revenue of the last game.

As a result, we've seen fewer and fewer driving games of either mindset, because official licenses are tremendously expensive, and wacky ideas are tremendously risky. I think I even wrote a standoffish preview of Driver: San Francisco before it came out, because its maverick approach to the genre could have gone either way.

So it costs more than ever to make driving games, and there's less guarantee they'll make any money. On PC, games like Assetto Corsa, Next Car Game, Project CARS, rFactor 2 et al are experimenting with early access and free-to-play models, and they're finding funders, buyers and gamers.

The way it stands, that's going to become increasingly rare as this generation progresses, and I don't have any brilliant solutions – I spent a hundred hours playing F1 2010 ferchristssakes, I'm not the proactive sort.

What I will say is that Driveclub – the final core content, the apparent changes to its design, and most importantly its sales – will give us the clearest indication as to whether the driving genre as we know it can adapt and survive on this new generation.