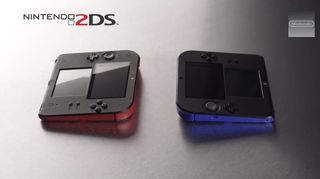 The recently announced 2DS in red and blue

Update: Scratch what we said before about the Nintendo 2DS having two screens, because it apparently has one.

A source from Nintendo of America has indeed confirmed that the screen is actually one touchscreen divided by a thin piece of plastic.

The move to create a tablet-esque 2DS seems to be part of Nintendo's cost-cutting plan to have a widely available, budget friendly, handheld device.

One screen most likely not affect the functionality of gameplay on the 2DS, but we'll have more on that later during our hands on.

Nintendo announced a new handheld system today: the 2DS. Yes, world, a 2DS. And no, it's not a joke.

The 2DS has come as a surprise to many, causing many gamers to ask "what the heck?" The handheld, for its randomness, is quite a bit cheaper than the Nintendo 3DS and Nintendo 3DS XL, as well as the PS Vita, which saw a recent price drop.

The 2DS is fully compatible with all 3DS and DS games, but is not 3D enabled.

The machine has a non-foldable form factor and a square appearance, which leaves the two screens and buttons pretty vulnerable, meaning a case is definitely recommended.

Along with a 4GB SD card, the 2DS will have two cameras on the back that can capture 3D pictures and video, but cannot display the 3D unless hooked up to a capable device or transferred to a 3DS.

There is only one speaker that only plays mono sound, compared to the stereo pair in the 3DS - but a headphone jack will feature full stereo.

TechRadar will have a hands on soon, but for now, check out Nintendo's video below and tell us what you think!