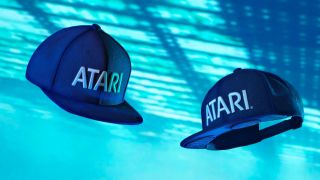 The winner of today's 'Movie Tie-In We Were Not Expecting' award goes to Atari, which is teaming up with Audioware and collectibles company NECA to create a... hat with speakers in it. To accompany Blade Runner 2049's release later this year.

It's a strange one for the resurrected gaming company, now better known for licensing its branding than for anything else. It has had a busier year than usual thanks to the E3 tease of its forthcoming Ataribox console, which promises to offer both retro and modern gaming in an old-school package.

The 'Speakerhats' on the other hand seem bemusingly unambitious – though they claim to have "high-fidelity" speakers in their brim, they seem little more than a novelty, Atari-branded baseball cap. The only noteworthy element is a so-called "multiplayer mode" letting multiple Speakerhat-wearing pals listen in on the same audio stream, though strangers sitting nearby are unlikely to appreciate it.

Alongside its Ataribox revival console, the company is now looking to put itself in a position to deliver a brand new range of Atari-branded gadgetry.

"With the recent reveal of our Ataribox project and now with Speakerhats, we envision a full range of connected personal devices that live at society's intersection of entertainment, technology and social connectivity that legendary film worlds like Blade Runner 2049 foretell," said AtariConnect COO Michael Arzt.

While it's difficult to see the link to the movie (the concept here is no more sci-fi than those beanie hats with built-in headphones), NECA COO Joel Weinshanker saw the Atari X Blade Runner partnership as the perfect match.

"The minute the new trailer hit, we started getting requests for Atari-branded Blade Runner 2049 products and knew we'd need to partner with Atari to satisfy the countless joint fans of both franchises," he said.

Rolling out in an extremely limited closed beta of just 10 units (to be won via a competition) there's no word yet on the wider release of the Speakerhats. We do have an approximate value though – $300, roughly converting to £230 / AU$380. They'd better be some mean-sounding speakers for that price, or all that cash will be lost... like... tears... in rain.