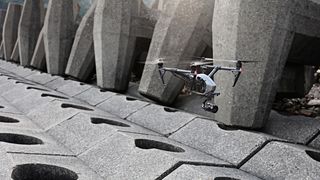 After the launch of the company's most portable drone yet, the Mavic Pro, DJI has turned its attention back to the high-end sector, launching two pro-spec drones with some serious camera chops.

The magnesium-alloy Inspire 2 is capable of speeds of up to 67mph, and will easily be able to track a car from a standing start, taking only 4 seconds to hit 50mph; and that's not forgetting the flight time of 27 minutes.

The pilot will get a new forward-facing camera to get the best flight view, with footage livestreamed to the master controller. The camera operator will then get a separate feed from the gimbal-mounted camera.

DJI offers a range of Zenmuse cameras for the Inspire 2, while it can be purchased as a kit with DJI's latest Zenmuse X5S camera, which features a 20.8MP Micro Four Thirds sensors and lens mounts, and is capable of recording 5.2K footage at 30fps and 4K at 60fps.

The Inspire 2 is priced at $2,999 / £3,059 for the aircraft only, while the kit including the Zenmuse X5S camera (and CinemaDNG and Apple ProRes license key) will be available for $6,158 – UK pricing still to be confirmed.

Building on the success of the Phantom 4, the new Pro model sees a welcome boost to the camera, which now features a larger 1.0-inch sensor with a 20MP resolution, while DJI claims the camera is capable of recording almost 12 stops of dynamic range.

For those wanting to shoot video, it's no surprise to see 4K featured, with a maximum frame rate of 60fps.

The Phantom 4 Pro comes with an all-new compact remote controller, and there's also a Pro+ variant, which has a high-luminance display that promises to provide a clear and vivid live HD view from the main camera along with the Phantom 4 Pro's flight info.